Okaaaaay sooooo Saturday night I thought I saw a ROACH in the kitchen...You all KNOW how I feel about ROACHES...THEY ARE EVIL!!! So I saw one in the kitchen but I decided that instead of telling my sis I would just wait to see if it disappeared....say what ever you want but my sis and I have a deal that if she kills them...I HAVE TO CLEAN IT UP!!! I happen to be scared to do BOTH!!!
.
Soooooo I figured that instead of telling my sis I would just go talk to Hanna on the phone and hope that by the time I was done that the roach would be GONE!!! Weeeeeeeelllll after me and Hanna talked for like an hour, I decided to go check and see if the roach was gone... IT WAS NOT!!!
.
When I sleathily peeked around the corner at it, much to my surprise it was in the SAME EXACT spot...I thought that was odd!!! So I got a litte closer and really looked at it!!!
When  I looked closer this time,
I realized WHY it hadn't moved!!!
It was ACTUALLY A PONY TAIL HOLDER!!! 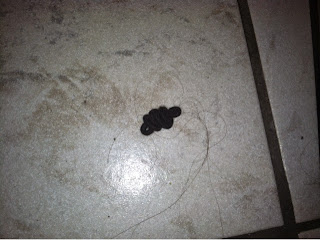