Soooooooo as we all know, YESTURDAY was Mother's Day!!! At my church, soooooo many of the mom's had corsages! Either given to them by their husbands, children, grandchildren, WHOEVER!!!
.
Well I'm sitting there before church with sis-in-law, its her VERY FIRST MOTHER'S DAY so i'm wishing her a happy first Mother's day and all that jazz, when my brother John, her husband comes over and in all seriousness says,
Hey Liz, do you wanna take that off Bethany's head and put it on your wrist? 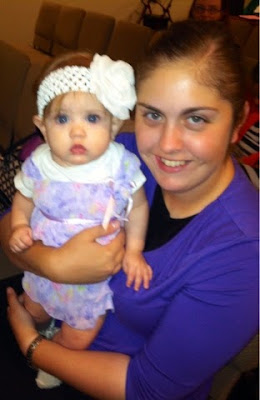 Apparently, my brother had noticed that all the other mom's had corsages but being that it was his wife's first one, he hadn't thought to get her one! Of course, BEING THE CHEAP MAN that he is, his daughter's headband was the fix for her NOT having one!!! AHAHAHAHAHAHA!!! Me and Liz just busted up laughing!!!Liz was like, THATS OK! And my brother just grinned, he's like, Well you know, I just don't want you to feel LEFT OUT!!! AHAHAHA!!! His daughter's headband for his wife's corsage...SUCH A GUY FIX!!!
♥Mary Frances :)
Posted by Mary Frances at 10:21:00 PM