This was my last day in The bay buuuuut, I'll be back soon in prep for Anali's wedding that Saturday!! I know I've missed the shower and a few days, don't worry, I'll get to those!!! (:
.
was another fun day! We slept in than ran errands for Heritage! After we did that, Hanna surprised her brother with an early birthday present... A nice watch!!! Buuuuut she figured he would be very particular about it and he should pick it out! Sooooo we all headed out to the mall annnnnd boy was he EVER PARTICULAR!! It had to have a black leather band, with a white face, actual numbers and a silver outline... Super simple buuuuut boy was that ever hard to find!!!! I FINALLY found exactly what he said he wanted buuuuut it was $900!!!! AHAHAHAHA!!! Hanna loves him buuuut...yeah...LOLOL!!! We went to like five different stores, and me, Hanna and Mesgana kept saying we found THE ONE...buuuuut alas there would be something he didn't like!!! I was like sooooo in awe of his particularness...buuuuut Hanna understood, she said she would be the same way...its the way THEY are!!! Sooooooooooooo then we FINALLY headed back to the first store annnnnnd FINALLY, praise be JESUS, he found it!!! 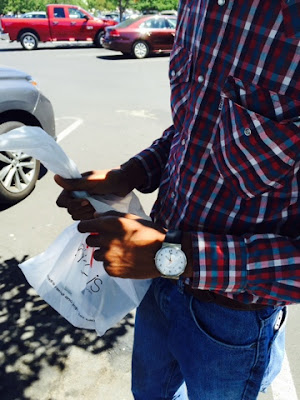 Then Hanna, Mesgana, Anali and I had leftover tacos and just hung out... Savoring our last days with Anali before Joe comes and steals her away!!! 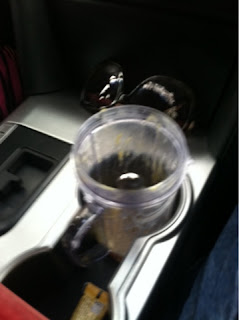 This the only other pic I have, buuuut someone, I won't mention any names, buuuut left their lemon/lush ice cream mug in their Big Sister's car... AHEM!!! Lolololol!!!
.
Then we headed out Berkley and had us some gooooood church!!! Bro. Kifle taught/preached a really good message about the history of the word Pentecost and how it was to celebrate the harvest! And you know how the day of Petecost was a day of harvest of souls, etc...and I won't say anymore cuz I don't want to misquote or botch it up!!! Lol buuuut it was very good!!!
.
When we got to church that night Andrew was there, Andrew Klan not Foster...LOL...annnnnd for anyone that asked me who the cute, white guy on my blog was, its HIM!!! AHAHAHA!!! and for some reason him being there made us all twice as hyper!!! I think cuz we knew that Heritage was starting the next day and we were all going to have a blast traveling there together!!! I don't think I've seen him laugh so hard as when I told him that my dream since I was four was to marry a black man!!! Then we all hung out and joked and laughed annnnd ate more tacos and basically, we're all super SIKED and hyperrrr about Heritage!!! Yaaaaayyy!! We're leaving at 4 am!!!
Posted by Mary Frances at 12:19:00 AM