So I always like to have a treat to give the kids when they get off the van and go home at the end of the night, its kinda a threat to them to behave on the way home buuuuut I mean, lets be honest, in the ALMOST NINE YEARS I've been doing this, I think I ONLY have actually NOT given them treats like twice...and more than likely it was cuz I was in a bad mood that I ACTUALLY didn't give it to them!
.
Weeeeeeelllll the kids LOOOOOVE Mexican candy, they've requested it many times, therefore, the last several weeks I've been buying the big O bulk bags from Food City and they've been VERY pleased with this!!! Last night in the van on the way to church they were asking me what the treat was this week and I said, CANDY!!! They were like, Mexican candy??? I'm like, YUP!!! They're like, AGAIN??? Its ALWAYS Mexican candy don't you have anything else? I'm like, Nooooo...they're like griping about it...Soooooooo I'm like, OMW, you guys, I just remembered, I DID BRING ANOTHER KIND OF CANDY!!!! They're like, YOU DID??? I'm like, YES!!! I don't IF you guys have ever heard of it before buuuuuuuuut its called...
NO CANDY!!!! 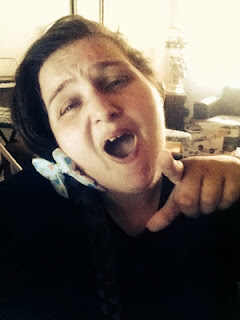 Sooooooo tonight you have a choice,  you can either have, MEXICAN CANDY or NO CANDY...Whichever one you want!!! Bahahahahahahahahahahahahaha!!! I then proceeded to laugh hysterically...good one Mary! GOOD ONE!!!
.

I've actually been getting on ALL the kids in general, church kids and bus kids about being thankful for what they're teachers give them for prizes in class!!! I'm just the helper but I said to them that I don't want to be hearing any of this, oh I don't like my prize can I get something else? I told them, THAT IS SOOOOOOOOO RUDE!!! Your teachers spend THEIR OWN MONEY on stuff for you guys, I don't care if you don't like it, THE ONLY THING THAT NEEDS TO BE COMING OUT OF YOUR MOUTH WHEN YOU RECIEVE SOMETHING IS A THANK YOU!!! (Unless you actually are allergic! you then have my permission to politely say, No thank you!!! LOL)
. 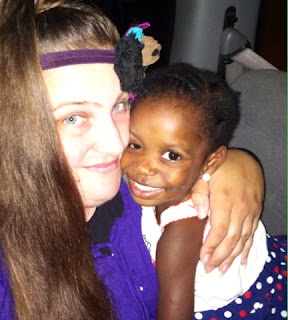 Soooooooooo there were only two boys that came last night... buuuuut they definitely made themselves known from the back of the van through our nostrils if you get my drift...someone said it smelled like BBQ, I'm like, this ain't no BBQ I've ever been too...I'm jus sayin... Anywayz, we made good use of the air freshener donation!!!

The girls were getting quite mad so when we drove by some police cars the girls were like, OH theres the PO PO!!!! We're gonna call them on you guys!!! They're like, WHAT are they gonna do??? They can't arrest us for that!!! The girls are like YES THEY CAN!!! Boys are like, NO!!! 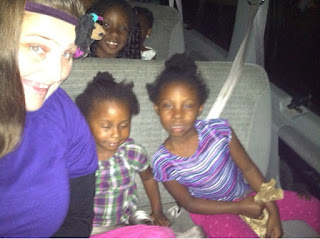 MARY CAN THEY ARREST US??? I'm like, weeeeeeeeeeeeelllll IF someone dies from the smell...THEN its MURDER...Soooooooooo YEAH...ANNNNNNND I"M PRETTY MUCH DYING OVER RIGHT NOW SO  YA ALL BETTER START PRAYING...I'm jus sayin...because MURDER IS A CRIME!!!  Obviously, since I'm writing this post, the boys didn't end up getting arrested!!! LOL
.
Bunny...she's a mess this lil one...sometimes you just gotta lock em in a snuggle in your armpit and say, child...
GO TO SLEEP!!! 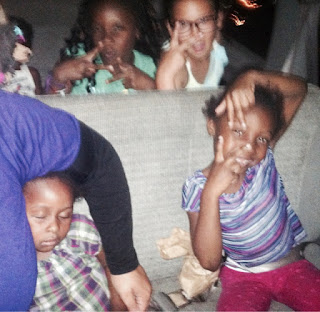 HIGHLIGHT OF THE NIGHT... 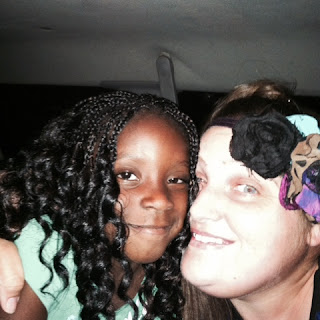 Dee Dee asked me what grade i'm in!!! I was like, OMW I LOOOOOVE YOU!!! So I told her I wasn't in school anymore, I graduated from high school a LOOOOOOOONG time ago!!! Then she asked me how old I was so I said 32!!! She's like, OH, your older than MY MOM, she's only 25 buuuuut she looks older than you!!! I'm like, AWWWW I LOOOOOOVE MY BABIES!!! She asked me what grade i'm in...annnnnd I've been graduated for soooooo long I could actually have gone through the entire 12 years of school AGAIN annnnnnd still be graduated!!! BAHAHAHAHAHA!!!
THANKS Dee Dee!!!
♥Mary Frances :)