This past Friday, I had the ONCE IN A LIFE TIME opportunity to meet THE VOICES OF CONNIE AND EUGENE from Adverture's in Odyssey!!!

My favorite part was when they did a scene from the episode, "A license to drive" It was weird because at first I was like, I don't think it really sounds like them, but then when you close your eyes and didn't look at the voice actors, it sounded JUST LIKE THEM!!! So I got a pic with them but its on someone else's camera so HOPEFULLY i'll see it eventually!!! LOL I have to add this to my list of great things accomplished, 1. Rode an elephant 2. Got a pic with the Oscar Meyer Hot dog truck 3. Got a pic with the Hello Kitty Café Van 4. Met the voices of CONNIE AND  EUGENE!!!
.
Then today we went to the Peach Festival at Schenpf's farm...which was FUN buuuuuuuuuuuuuuuut waaaaaaaaay over crowded!!! If we hadn't already driven an hour out there we probably would have turned around and left buuuuut we were in it for the long haul and made the best of it!!! 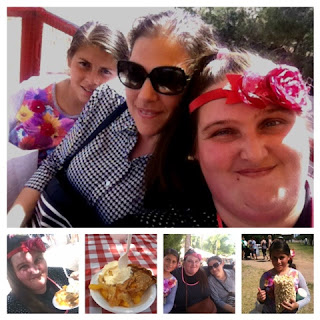 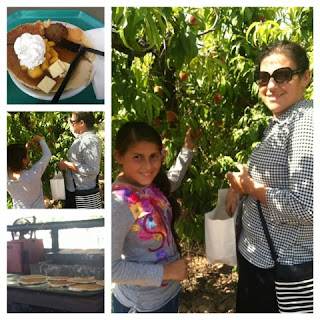 You shoulda seen HOW MANY PEACHES people were buying...like boxes and boxes...I was like, Ummmmm...I don't have any grocery ads on me but I'm pretty sure they're cheaper than $3 a pound at the store..."But that ain't none of my business!!! AHAHAHA!!!
I ate one, it was GOOD!!! Tasted just like a juicy PEACH!!! :))) 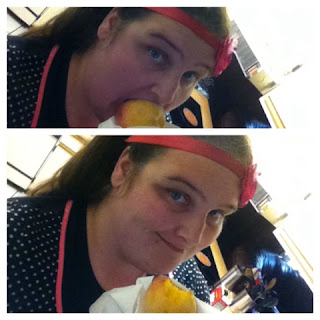 By the time we left at 11;30ish, there were cars parked miles outside of the farm and people were walking several miles in the scalding AZ heat, I was like okaaaaaaaaaay it was good food buuuut NOT THAT GOOD!!! Aparently, we don't got a whole lot going on here in Arizona, buuuuuuuut that Ain't nona my business!!! AHAHAHAHA!!!
♥Mary Frances :)
Posted by Mary Frances at 11:02:00 PM