Allowed to be single!!!

I was reading in some fiction novels and it struck me what a blessing it is that, WE'RE ACTUALLY ALLOWED TO BE SINGLE!!! Liiiiiiiiike back in the day, woman were literally a man's property!!! ANNNND her ONLY DUTY in life was TO GET MARRIED!!! Liiiiiike literally, she HAD TO because there was NOTHING else for her to do with herself!!! LIKE no way that she could support herself!
.
Woman were forced to marry, WHOEVER and IF for some reason she didn't get married, she would just be passed around from relative to relative because it wasn't considered "Proper" for her to go anywhere without a CHAPERONE!!! They had NO means to support themselves because woman weren't allowed to work! I'm just like, THANK GOD, we don't live in those days anymore ladies!!! We have the ability to get up and get a job and take care of ourselves...Sistas believe it or not...THATS A BLESSING!!!
.
THANK GOD we don't have to worry about being passed from relative to relative, OR JUST MARRY ANY OH BRO!!!
THANK GOD... 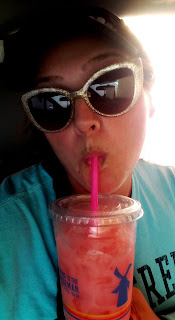