Sooooooo last weekend I took Odin to the splash pad at the Scottsdale Quarter, a VERY RITZY upscale shopping center, in Scottsdale. Now you have to understand that Scottsdale, also knowns SNOTTSdale, is a generally speaking, more wealthy city. While there are a few ghetto areas, its kinda like Glendale, most of its ghetto but there are some REALLY RITZY areas of Glendale that the public bathrooms actually aren't locked up with a code to enter, buuuuuuuuuut there far and few in between, while Scottsdale is the opposite, mostly ritzy with a FEW ghetto areas, with that being said, THE SCOTTSDALE QUARTER is a very ritzy area...Not that I'm intimidated by anyone's snootiness!!! LOL
.
So I take O to the Scottsdale Quarter, we're surrounded by all the Scottsdale Mom's and I'm just lounged out on a chair, totally chillaxing, reading the latest Adventure's In Odyssey book, WHEN...O just shouts to me:
"AUNT MARY,
can I PEE on the lily pad?! say yes or no!" 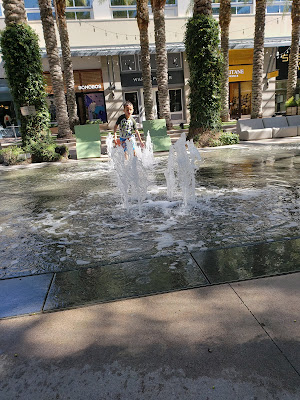 I look around at all these snooty blonde mom's that look about to pass out upon his question and yell out,
"NOOOOOOOOOOOOOOO!!!"
He says, "oh ok, SORRY ABOUT THAT!!!
I won't do it again!!!"

AHAHAHAHAHAHAHAHAHAHAAAA!!! I look around a all these Scottsdale Mom's aghast, it was hard to keep from busting up laughing, especially when Odin then felt it was his personal duty to go to every child and let them know, "No peeing in here guys, it's not allowed! We don't do that that guys, we don't pee on the lily pad!" AHAHAHAHAAHAHAHAAA!!! I love that Kid!!!! 😍😍😍
♥Mary Frances :)
Posted by Mary Frances at 9:46:00 AM