Soooooooooo when I was with Jenny in Carlsbad, weeeeeelllll I was DETERMINED that we were going to play 13 Dead End Drive!!! I think I've been talking to them about playing this game since I first bought my ticket to go...maybe even before that!!! 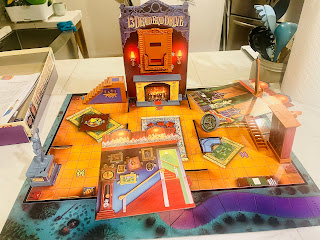 The whole point of the game is to win Aunt Agatha's fortune by killing off the other characters in the house traps! Sounds kinda violent buuuuuuuuuut it's REALLY FUNNNNN!!!  BAHAHAHAHAAAA!!!
.
Weeeeeeeellll we ended up being soooooooo busy we didn't end up playing it til after church Sunday night and we were all SUPERRRR tired!!! Especially Jenny who even PURPOSEFULLY killed one of her own characters BECAUSE SHE HATES CATS!!! Yes...thats how much she hates them!!! LOL (I was a little offended because you know if I was a cat that is what I think I would look like...white and fluffy!!! and one of my nicknames IS fluffy cat!)
.
Anyways, I was playing pretty bad myself, WEEEEEELLLLL only cuz I was STILL LEARNING how to play as we went, buuuuuuuuut Jenny and Ryan had basically killed off all my characters EXCEPT for one!!!
.
Well at this point I was liiiiiiiiike, soooooo basically I'm going to lose?!?!?! So Ryan says well most likely. Buuuuuuuut instead of just conceding, OH NO, I NEVERRR CONCEDE A GAME, I nverrrrr give up with out a FIGHT!!! I said, WELLLLLLLLLL you neverrrrrr know!!!! After all WITH GOD ALL THINGS ARE POSSIBLE!!!! I think I may have even asked God to help me beat my enemies...YES...I do stuff like that in board games!!!! AHAHAHAAA!!!
.
And from that point on I started going after KILLING RYAN AND JENNY'S CHARACTERS in the trapS!!! Before too long Jenny was out, after all she had killed her own character the cat and we got the rest!!! ANNNNND even though I only had one character left, I went whole heartedly after killing Ryan's characters.
.
Weeeeeeellllll now it was basically an equal game, Ryan and I each had one character left and I determined to kill his last character, I forgot about getting to the finish line, meanwhile Ryan bamboozled me annnnnnnd he made it with his last character to the finish line and WON!!!
.
I was liiiiiiiiiiike OH MAAAAAAAAAAAAAN!!!! I ALMOST WON!!! I came soooooooooo close to winning!!! SEE even though It looked like I was going to be the FIRST ONE OUT of the game, I turned it around and I came sooooooooo close to winning too!!! Ryan was like, i'm paraphrasing, yeah, if you had actually focused on WINNING instead of killing my characters, you most likely would have won!!!(and even though my blog gives him a headache, that inspired me for this devotional!🙄🙄🙄🙄🙄🙄🙄) I was liiiiiike, AAAAAAAAAH!!!
.
LATER ON...
It made me think how sometimes in our walk with God we do the same thing. We start off determined to win, buuuuuuuut as the cares of this life come along, We forget what it's all really about and we begin to focus on something else.
.
Instead of focusing on reaching lost souls, we focus on positions. Or instead of worshipping God we focus on hurts and offenses. Instead of focusing on glorifying God we focus on being noticed and receiving credit for the good things we have done. Instead of focusing on giving we focus on being blessed. Instead of focusing on God's anointing and favor in our life, we focus on our own accomplishments. Instead of focusing on a relationship with God we focus on doing things for God.
.
While most of these things in of themselves are not bad things, they can not become our focus in this life. It's all about JESUS!!! Jesus! Jesus! JESUS!!! Jesus is the one who died for us. Jesus' name washes away my sin. Jesus is the only name that saves. Jesus HAS TO BE OUR FOCUS IN LIFE!!! Jesus is all that matters. We have to focus on living for Jesus! We have to focus on what Jesus did for us. We have to focus on being pleasing to Jesus! We have to focus on telling others about Jesus! We have to focus on one day seeing Jesus face to face!!!
.
One thing my mom ALWAYS told me in life before she died was, "Just keep your eyes on Jesus Mary, and everything will be alright." When hurts in this life come my way, I remember her words. Instead of focusing on my problems, I have to focus on Jesus! If I focus on hurts and offenses I start to stumble and lose my way, buuuuuut if I just focus on JESUS, I'M GONNA MAKE IT ALL THE WAY!!!
.
I just want to encourage everyone today to keep their focus on JESUS!!! You can come sooooooo close to making it, buuuuuuut if you lose your focus on what really matters your gonna slip!!!! BUUUUUUUT, If you'll just keep your eyes on JESUS, everything is going to be alright!!! YOUR GOING TO MAKE IT!!!! As the song says, ♪♪Turn your eyes upon Jesus,
Look full in his wonderful face♫
♫And the things of earth will grow strangely dim
♪In the light of his glory and grace♫
"Looking unto Jesus the author and finisher of our faith; who for the joy that was set before him endured the cross, despising the shame, and is set down at the right hand of the throne of God." (Hebrews 12:2)
♥Mary Frances :)
Posted by Mary Frances at 12:00:00 AM