Soooooo it's been a while now but I wanted to share with you an older memory. It was a Wednesday night at kids church, several years ago. My brother and his wife were doing this relay game with the kids where they had take M&Ms and put them into 4 different cups according to their colors and the first one done ✔️ was the winner 🥇
.
So they did 4 boys first and the boy that won got to go up against the girl that one in her group of four girls, WELLLLLL this girl Queen by far beat ALL the other girls...
.
Buuuuuuuuuuuuuuut...
OF COURSE one of the girls  noticed that within all the M&Ms she had split up, there were NO BLUE M&Ms. Weeeeeeelllllll, YOU KNOW KIDS, of course all the girls that lost were like, THATS NOT FAIR!!!
.
So Queen looks at her cups and then, INSTEAD OF BALKING BACK AT HER TEAM MATES, she is like, YOU KNOW WHAT, your right, I DIDN'T have any blue ones, I PROMISE I DID NOT EAT THEM, buuuuuut you guys are right, that wasn't FAIR, LETS PLAY IT AGAIN,
SO I CAN WIN FAIRLY!!! 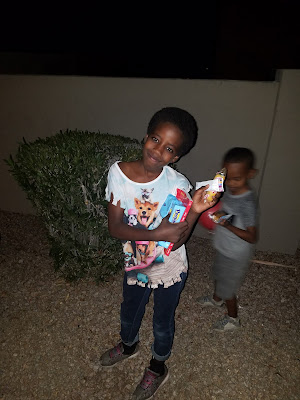 Annnnnd that was EXACTLEY WHAT SHE DID!!!
She played the game AGAIN and WON AGAIN....buuuuuut this time, FAIR AND SQUARE!!! Then she went on and played against the boy that won AND beat him too!!!
.
I couldn't help but think, WHAT A GOOD SPIRIT this little girl Queen had! She was confident enough in her ability to win the game, that she was willing to risk losing her prize AND PLAY IT AGAIN!!!
.
When the other girls started complaining about her winning unfairly, she could have been like, NO I WON!!! And you know what, SHE DID WIN! It was NOT her fault that she hadn't been given any blue M&M's, AND my brother and sis-in-law would NOT have made her play again to prove it! But she CHOSE on her own accord to be fair to the other players and play again!!!
.
AND it got me to thinking...
Are we CONFIDENT ENOUGH IN GOD, that He will do what is best for us, that we are willing to LOSE the prize we have been waiting for,  so he can teach us, TO REALLY TRUST IN HIM???? So He can prove to us that we can truly put our confidence in Him? If something is God's will for your life, you won't  have to manipulate a situation for it to happen, just stay in His will and GOD WILL MAKE IT HAPPEN!!!
Do you trust God ENOUGH to say, you know what God, I'm willing to let go, SO YOU CAN PROVE yourself to me, SO YOU CAN SHOW ME, that you REALLY CAN DO IT! The right way! Without MY "HELP" and ON YOUR OWN TERMS!!! When we try to manipulate a situation, our confidence is NOT truly in God's ability, BUT IN OUR ABILITY TO MAKE GOD'S WILL COME TO PASS!!!
.
Trusting in God is MORE than just believing that he is going to do what you think he should do, IT'S BELIEVEING that he is doing what's BEST FOR YOU, EVEN when He doesn't do what YOU THINK HE SHOULD DO!!!  Instead of pouting and saying but, but, but, buuuuuuuuuuuuuuut THAT'S NOT FAIR!!!!
Instead we can say, Ok God, I thought you gave this to me, BUT my confidence in you, is high enough to say, OK, LET'S DO THIS AGAIN!!! I trust that you really do know what is best for me! SHOW ME WHAT YOU CAN REALLY DO GOD!!!
.
MY FRIENDS, He ONLY has GOOD PLANS FOR US, we're only human, but cast your doubts at his feet, You can put your confidence IN HIM!!! We can be so confident in God, that just when it seems all our dreams are finally coming true, they can slip from our fingers and dissolve to nothingness, YET, we can say with confidence, GOD IS STILL GOING TO DO IT!!!
.
"For the LORD shall be thy confidence, and shall keep thy foot from being taken." (Proverbs 3:26)
♥Mary Frances :)
Posted by Mary Frances at 5:00:00 PM