Hey you guys, as I’ve said before, I loooooooove Starbucks Pumpkin 🎃 Spice Latte, buuuuuuut a small had 39 grams of sugar and 39 carbs!!!! IN THE SMALL!!!
.
Weeeeeeeellll a few weeks ago I attempted to make A low carb version from LOW carb love, that girl has some great recipes buuuuut this was DISGUSTING 🤮!!!!
.
Well I kinda came up with my own version!!!! I made my own cold brew in my French press, if you don’t knooooow how to do that just google the directions, it’s superrrrrrr EASY!!! And I got a really big drink cup and added a cup of cold brew to a pumpkin spice protein shake, waaaaaaaaay better!!!! 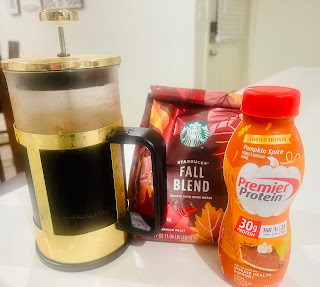 I ACTUALLY have another even better recipe buuuuuuuuuut I’m missing one of the ingredients soooooo I’ll show you guys this one next week!!!!
.
I’m drinking my coffee at home again, it’s cheaper and Probably the healthiest- I’ll save my low carb drinks at Dutch bros and black rock for splurges for right now!!!! Im really into my PROTIEN shakes right now!!!
.
Did you guys know you can lose fat and gain muscle just by adding in protein shakes?!? Your body immediately absorbs the protein from a protein shake where it doesn’t always from just eating meat!
.
So at this weight loss place I has been going to I was staying the same and I was kinda frustrated and the lady was lecturing me about what to eat and I was liiiiiike I PROMISE I an!! Then I said maybe I’m getting some muscle instead? And she didn’t believe me but I was like can we do the body scan scale and so she agreed and when it printed out, she was like OH YOUR RIGHT!!!!
.
You lost 6 pounds of fat and gained 8 pounds of muscle!!! I was liiiiiike Yeeeeeeeessssssssssssss!!!!!
.
Well to lose fat you gotta replace a meal with it, if you don’t want to lose fat or don’t have any to lose… just add 1-2 protein shakes a day!!! I mean most people wanna lose buuuuuuuuuut there’s a FEW…. MAYBE 🤔!!!
.
We all know I’m doing a meal replacement!!!
Bahahahahaaa!!!!!😂😂😂😂😂🙌
♥Mary Frances :)
P.S. Premier chocolate protein is THE BEST!!!
2nd 🥈 is premier protein chocolate PB!!!
Posted by Mary Frances at 10:00:00 PM