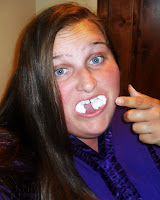 OMW! What and experience! I looked at myself in the mirror and just BUSTED up laughing! I looked HORRIBLE!!! Sooooooo I didn't know what to expect cause the last time I went to the dentist for an emergency pull the dentist was this Asian-gone-gangsta dude! LOL! NO JOKE! and he kept wanting to pull more teeth that were IN THE FRONT! I was like uh...NOOOO!
Soooo this time I had to get four teeth pulled! (Don't worry...they were ALL in the back!) two wisDUMB and two molars! One tooth was broken, one cracked and something like one had the roots wrapped all around! Those two were VERY hard to get out!!! I thought I was gonna DIE!!! I mean they numbed my mouth but the pressure still hurts your jaw, your face, your neck, your head....LOL!
Plus I was feeling clausterphobic and HATE staying still for that long!!! And they had stick the lil wedger things in my mouth to keep it open wide enouch...cause even though I have a BIG MOUTH...my actual mouth is little I guess! LOL
Of course as soon as they start I feel an itch on my eye, then my nose, then my throat!!! i was like AAAAH! then the little sucky thing that the nurse does with that one thing...OMW....I was seriousley getting ready to throw up!!! The ONLY thing that helped me was the fact that he was CUTE!!! (And i was prayin the whole time!!) I was like...okaaaay I'm just gonna LOOK into his eyes, and they were like the prettiest shade of brown, really dark on the outside, then lighter in the middle the REALLY dark right in the middle!...THEN all of the sudden Micheal Buble music comes on...I was like OOOO nice!!! AND I admit... I did try and see through his gloved hand if there was a ring...BUT I couldn't see!!! HAHAHA!!!! I'm telling you ONE THING...the fact that, that dentist was cute was FO SHO to his benefit at that moment...cause I think seriousley would have thrown up otherwise!!!!
Sooooooooo once again...
THANK GOD FOR CUTE GUYS!!!
Posted by Mary Frances at 2:00:00 AM