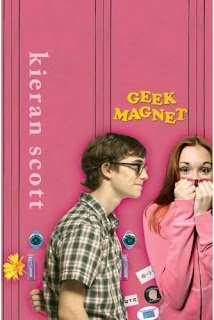 Have you ever heard the term Guy magnet?
Like, "Omw that girl is such a "Guy magnet!" In other words she is a very good looking girl and she ATTRACTS all the guys..."GUY MAGNET!!!" And if it is a cute guy that attracts all the girls they'll say "OMW! He is such a "Chick Magnet!"  So then I've seen these t-shirts that say stuff like, Geek Magnet or Nerd Magnet OR even Dork Magnet!!! You know like if your the kind of person that attracts Geeks, Nerds OR Dorks!!!! WEEEELLLL I've decided that I just PLAIN and SIMPLE need a t-shirt that says...
.
.
WEIRDO MAGNET!!!
Because THAT my friends is what I seem to attract!!!
SERIOUSLEY!!! LOLOLOL!!! Have you EVER been asked out by the AM PM gas attendent, while you were on line paying for gas?! I HAVE!!! Have you ever been proposed to IN the GHETTO community college cafetereia?!?! I HAVE!!!! Has a guy ever begged you to be his wife and when you said NOOOO a million times, he THEN asks you if you would ever consider being his second wife IF you were to break up with your boyfriend, but he had already married another woman BECAUSE he is a polygamist?!?! I HAVE!!! Or has anyone ever said to you...Okaaaay I laugh SOOOOO hard EVERY time I read this...have they ever said,  'I hope and pray that after a thoughtful consideration, you will give me a room in your heart to accomodate the Will of God ."  I HAVE!!! BAHAHAHAHA!!! That one makes me laugh SOOOO hard just seeing it again!!! OR been the one that felt like we should invite the homeless man to church, then looked at his cardboard sign and read, HELP ME GOD, I NEED A WIFE! I HAVE! OR a guy carries around a pic of you and your ex and still tells everyone that your his girlfriend?!?! I HAVE!!!
AND theres soooooo many more, but I won't even go there...my sis says these are ALL MY OWN FAULT!!! She says, "Thats what you get for being NICE!" LOL
GEEK?! NERD?!?! DORK?!?!?
I can ONLY wish I was that kinda magnet!!!
HAHAHA!!! I guess I better go get my t-shirt!!! ;) ;) :) :)
P.S. So what kind of magnet would YOU be?!?!
Posted by Mary Frances at 12:00:00 AM