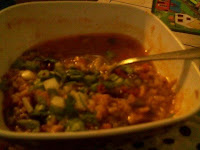 OMW!!! Sooooo I don't wanna like brag about myself or nothing but, OKaaaay I take that back, ACTUALLY, I do want to brag about myself!!!!! (Just gonna be honest!;) I MADE LIKE THE AWESOMEST SOUP EVER!!! It was sooooo GOOD! I was like WOW! And I just made the whole thing up myself. AND I think it's pretty healthy too, although I wasn't actually sure how to figure out the calories or WW points for it!
And like ANYONE and EVERYONE that stepped foot into my household, weather coming home from work, dropping off kids or catching a ride, EVERYONE was given some to try and they all said they LOVED it! I was SOOO happy!!! The biggest honor of ALL was that my mamma tryed some and said it was REALLY good! AND she don't even like spicy stuff! But when I came out of our house to go run some errands with her, and I got in her car, she was like "WHAT are you cookin in there? YOU SMELL GOOD!"

Soooo I was sitting there eating a bowl, just TOTALLY complimenting myself and I'm thinkin okaaay so WHAT should I name my soup? Cuz I mean it's like SOOOO good it just HAS to have a name for it. So i'm thinking about my soup, It has some punch to it, almost like some slight attitude but not a ton... its kind of got a southwestern twist to it, it's a little spicy but not too hot, just like a kick in the shins to wake you up, but it doesn't actually knock you out..DELICOUS... Then ALL of the sudden I realized that the soup reminded me of someone, someone special that I just couldn't stop thinking about while I ate it...AND as I thought about this person, I knew the name for my AMaZING soup just had to be ....

ARIZONA HOTTIE SOUP!
Yes, thats right people, I named the soup after MYSELF!!! ;) ;) ;)
Heres whatcha need to make it...
3 boneless skinless chicken breast
Chicken broth
(For the broth I only had like half a thing in the fridge so then I just used the water that I had boiled my chicken in combination with the broth)
1 box of Spanish Rice-a-roni
(and I used the Natural, wild rice one, but you can use whatever)
1/2 pobalono pepper
1 Jalepeno pepper
some red oninon
some yellow onion
Cilantro
5 cubes of chicken bullion
about 5 chunks of garlic
Green onion
Fresh chopped basil
1 can of kidney beans
1 can of stewed tomatoes
Crushed red pepper
Cayenne pepper
Chili powder
Garlic powder
Paprika powder
Season salt
2 tablespoons of Olive oil
(You can use whatever but Olive oil is Healthiest)
NOW heres whatcha do!!!
Boil the three chicken breast till they are cooked
Chop up the onions, peppers, garlic, basil (I like to chop up everything really nice and small)
saute them in the olive oil until they start to brown
Add in the kindey beans and stewed tomatoes
Add Paprika, chili powder, cayenne pepper, crushed red pepper, garlic powder, season salt
(I wish I could tell you guys the exact amount but I really don't measure the spicy peppers were probably only about 1/2 teaspoon and the other ones a whole teaspoon, You just gotta go with your instincts and decide how spicey you want it! FYI- when you do the Jalepeno pepper, the SPICE is in all those little seeds so you decide how many you want in I used about half )
Let this all kind of simmer in saute pan for about 15 minutes
Cut up chicken and put in seperate pot will all your broth
(This is like a medium size pan, maybe large but NOT HUGE!!!)
After 15 minutes combine all the veggies in with the chicken and broth
Bring to a boil then bring the heat back down to medium
let it boil together for about 30-45 minutes
Now add in your box of Rice-a-roni
Let it boil for about 10-15 min just check your rice and see if its cooked
While your rice is cookin chop up some more onions and peppers real fine and some CILANTRO
When your soup is done...
Get YO self a bowl!!!
Sprinkle on top the fresh veggies you just chopped AND OMW take a bite!!! TAKE A BITE!!!
YOU ain't gonna be SORRY!!!
Cuz it's AWESOME!!! IRRESISTABLE!!! YOU LOVE IT! YOU WANT MORE!!!
AND that my friends is WHY it's named after me!!!
(Don't deny it!!! Thats WHY YOUR on MY BLOG AGAIN!!! Uh huh, uh huh! ;)
Well, there you have it folks...
ARIZONA HOTTIE SOUP!!!
Eat a bowl and THINK OF ME!!! ;) ;) ;)
Posted by Mary Frances at 1:35:00 AM