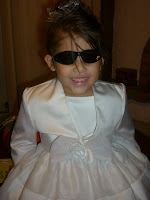 Sooooooo Mary Jo has ALWAYS had this thing where she totally just makes up her own lyrics to the songs and just TOTALLY thinks that she is singing it RIGHT!!! Like for "Jesus I Love You" Instead of saying your the peace in my storm she says, "Your THE PIZZA in my storm!" Or for the song that says there will be PEACE in the vally for you...and me! SHe says, "There will be PEAS in the valley!!!" LOL AND the favorite one, that TOTALLY cracked Bishop Abbott up, was for the song Calvary, STILL works for me!! MJ was like, "CALORIES!!! Still work for ME!!!" Bahahaha!
BUT the other day she was just singing her heart out and I just like TOTALLY LOST IT!!! We like, ABSOLUTELY love the song Jason Crabb sings, "I've Never Been This Homesick Before" and so MJ was just BELTING it out and it gets to this part where they say, I'm not going to be old and feeble ANYMORE!!! And so I'm listening and MJ is like, "I'm NOT going to be OLD AND SINGLE ANYMORE!!! BAHAHAHAHA!!! LOLOLOL!!! OMW! I was laughing SOOOO HARD!!!
.
I guess its pretty obivous what she hears around the house...LOL...Yes, she lives with a mom and aunt...that are "OLD AND SINGLE" AHAHAHAHAHA! 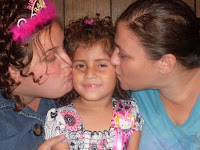 BUT...THERE is coming a day,

when EVEN Mary And Theresa
AREN'T gonna be single ANYMORE!!!
WOOOOOO!
Posted by Mary Frances at 1:51:00 AM