Weeeeeellllll as I said in an earlier post this week, its TRUE...God REALLY does have a way of just squashing the pride RIGHT OUT OF YOU!!! Okaaaaaaay sooooo I made this TOTALLY awesome Chocolate cake for a friend's birthday this past Sunday. It was soooooooo good!!! I mean like, EVERYONE was complimenting me on it and I was OH YEAH!!! I'm SUCH a gooood cook!!!  I'm soooo AWESOME!!! So I decided that I would make this SAME cake for my brother's birthday on Tuesday and OMW...WOW!!! Well it tasted GOOOOOOD but... I sooooo messed up on the icing!!! LOL! I made such a mess out of it and it looked HORRID!!! My brothers TOTALLY cracked up laughing when they saw it!!! i was like MAN!!! God you SURE do have a way of squeezing the pride out of me!!! 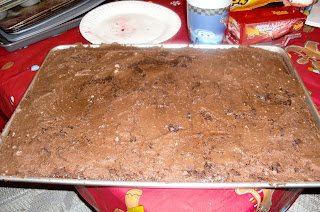 The SAME thing happened last year at my brother's birthday party!!!! I had been making ALL this awesome stuff that was turning out soooo GREAT!!! I mean I had just made this AWESOME melt in your mouth apple pie! I had made HOMEMADE Chicken pot pies, the crust and EVERYTHING  from scratch and I was like SOOOOO bragging to EVERYONE about it!!! Then, I MADE my brother's birthday cake last year and I just KNEW it was gonna be AWESOME!!!
AND SOOOOOO I doubled the recipe...PROBLEM... was that I still used the same size pan which was taking it a really long time to cook in the middle, BUT on the outside it was cooking regular, BUT the middle kept being raw and the more I cooked it, the more DRY it was on the outside...FINALLY...the middle was cooked but the cake was PRETTY DRIED out!!! Well I frosted it so it STILL looked good and HOPED that it wouldn't be noticable...BUT IT WAS!!! LOL! Everyone was like, OH MARY!!! HAHA!!! Well then the Abbott's came to pick up Denae and Bishop Abbott and I found myself STUPIDLY asking if he wanted to take a peace with him. ( I have NO idea WHY I asked since it was all dried out!) He said yes and so I cut him a peice in the middle and gave it to him and they left!
A week later I was talkin to Denae and I was like MAN...God REALLY has a way of humbling me. I'm like, WHENEVER I start bragging on my cooking, the NEXT thing I know I'm totally MESSING UP! I'm like I mean my pride in my cookin was soooo HIGH and now its like GONE!!! And she is like, well what did you mess up on? Soooooo i'm like ABE's CAKE..DUH!!! and she is like, WHAT?! My parent's LOVED your cake!!! I'm like WHAT?! 4 REALZ?! She was like, yeah they said it was perfectly moist and stuff...THEN I remembered...I had Cut them the peice EXACTLY in the middle!!!! Soooo WHILE every one else had suffered and neary choked on the dryness of the cake...The Abbott's had gotten the ONE PERFECT peice!!! HAHAHA!!!She was like, HONESTLY Mary, they LOVED it!!! They couldn't even get enough of it!!!
I was like OMW!!! WOW!!! AND then I told Denae...Weeelllll THERE goes my pride...its WAAAAAAAAY back up again!!! AHAHA! But YOU know that God is ALWAYS right there to squashing it back out of me again...I JUST FEEL bad for my brother that the 'pride squashing' keeps taking place on HIS BIRTHDAY CAKES!!!
Posted by Mary Frances at 1:04:00 AM