Weeeeeelllll I just HAD to do a blog post on my good friends, The Phelps from Prescott, AKA THE DORKS!!! Weeeeelll thats always been my name for Justin, i told him back in the day that it didn't matter if he became some big time preacher preaching at some conference, I would still be yellin out...HEEEEEY DORK!!! HAHAHA...and so when him and Tara got married she just naturally became Mrs. Dork...LOLOL!!! (To any of you all that were with my at iHop this past week, JUSTIN is the one that got the blanket thrown over him during the Heritage bagel story!!! HAHAHA!!!)
. 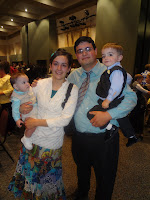 Sooooo during our teen years, Justin and I were best friends...pretty much up until he got with Tara... (cuz i'm NOT one of those physcho girlZ that thinks you cans till be best friends with a guy after they get married)...LOL...anyhow...it all happened cuz we both had FRIENDS that we had crushes on... soooooo yeah we were USING each other...LOL...I remember when we realized that we were BOTH USING EACH OTHER!!! HAHA!!! Both us were just like, SOOOO you mean you don't really want to be my friend?! SOOOO YOUR USING ME?!?! Both of us responded back to each other like, YUP...like I would really WANT TO BE YOUR FRIEND!!! BAHAHA!!!
.
ANNNNND Justin is sooooooo the one that helped me start my stalking career!!! AHAHAHA!!! Soooo yeah...I liked this guy from Justin's church, I won't like mention his name on my blog, but this is the guy that I brought camera binoculars to Conqueror's Conference and i stalked this guy while he played the piano/organ on the platform...BAHAHAHAHA...
.
So anywayZ, Justin figured out this guy's password (Puff 28...BAHAHAHA!) and helped me hack into his email account and we used to read his emails from this chick he liked all the time and like I don't what I did but I made it so that I could NOT ONLY read his emails FROM THIS GIRL...buuuut I could read ALL the emails he was sending out too...OMW CAN YOU BELIEVE that we would do that??? Then we like got CONVICTED or scared...something like that and I think we like confessed to it...buuuut yeah that was the beginnin of my career as a stalker!!! ;)
.
AND then like since he helped me stalk, I would help him stalk and yeah...neither of us got very far in our STALKIN careers...even though i'm STILL at it...;)...buuuuut then one day Justin met the beautiful TARA and I think we ALL knew they were meant for each other  when Tara looked at the bottom of her shoes and they said, "Skid Resistant!" (Which is kinda an inside joke to this test we made up called, "How to know she really LOVES YOU!" AHAHAHA!)And Tara's brother Jordan likes to think that HE WAS the first one that found out Justin liked Tara, buuuuuut NO...I WAS THE FIRST ONE HE TOLD!!!
.
Cuz like, he was all worried about HOW he was gonna tell his friend Jordan that he liked his sister and I can't remember WHAAAAT all I said to advise him but i'm sure it was some AMAZING advice and wisedumb!!! BAHAHA!!! Sooooo, Yeah...when Jordan was giving his best man speech at the wedding...I soooo just wanted to interrupt him and say NO actually, I WAS the first one Justin told...cuz I helped him tell you...buuuuuut yeah...Jordan was like cryin and stuff sooooo I just kept my mouth shut...buuuuuut NOW i'm sayin it!!! LOLOL!!!
I WAS THE FIRST ONE JUSTIN TOLD THAT HE LIKED TARA!!! :p
.
AnywayZ, him and his wife came over to me at Old Time Camp Meeting last week and I was sooooooo HAPPPY to them...buuuuuut...its been several years since I have seen them and I was like SHOCKED...LIKE...OMW YOU ALL HAVE TWO KIDS NOW?!?!?! When did THIS happen?!?! sooooo Here they are...
THE DORKS!!! 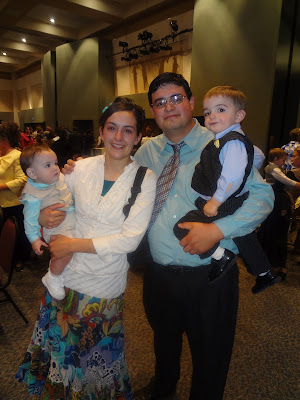 I was just like, this is SOOOOOO WEIRD!!! I mean, I TAUGHT JUSTIN HOW TO TALK TO GIRLS and NOW, he is married with two kids and I'm still single, STILL TRYIN TO FIGURE OUT HOW TO TALK TO GUYS...and like gettin ready to go to a youth night...cRaZy...AND I was like, OMW I'm bloggin about you guys sooooo BE LOOKIN!!! LOL ANNNND yeah...then I walked away...cuz like...
i'm STILL a young person...
and THEY ARE ADULTS...
and I was gettin bored!!!
HEE, hee!!!
♥Mary Frances :)
Posted by Mary Frances at 12:00:00 AM