Knocking on the floor!

This was sooooo FUNNNY!!! I go into our room Thursday night after we had already had an extension to stay out later and play volley ball, (which THANK YOU ALAHONDRA for being brave and asking ANNNNND thank you Bro. Andrew for being AWESOME and saying YES!!! :) AnywayZ, we get back to our rooms and its LAAAAAAATE like 2 am by now and all of the SUDDEN I see DAISY, YES I said DAISY, knocking on the floor! 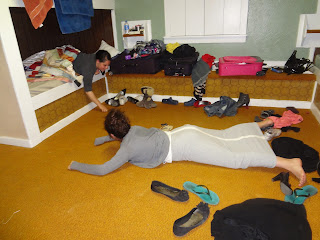 I'm like WHAAAAT in the world?! AND Alahondra was on her top bunk and was like OH DAISY don't even respond and she was like, OH NO there is something in me I just HAVE TO!!! So what was going on was that THE GUYS were in a room beneath us and were somehow knockin on their ceiling to US, which is our floor!!! LOLOLOL!!! Can we say DESPERATE???? Bahahahaahaha!!!! 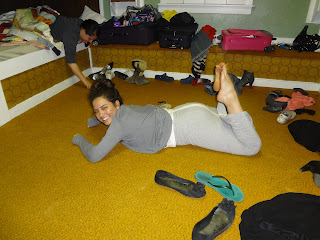 Sooooooo the NEXT thing I know Alahondra was off her top bunk, STILL NOT SURE WHY she chose a top bunk when the bottom one was empty, I guess she is just WEIRRRRD like that, and she is just now laying flat out on the floor knocking back FULL FORCE! AND me, I'm just sittin there like, OKAAAAAY they probabley aren't supposed to be doing this buuuuut its really funny, sooooooo i'm just snapping pictures....WEEEEEELLLLL ALL OF THE SUDDEN... 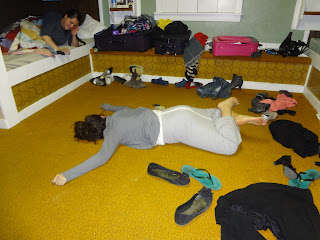 I hear the scuffling of feet down the hall coming towards our room, ANNNNND I won't mention any names, BUUUUUUUUUT I knew they were the feet of our very-pregnant-about-to-pop dorm mom, and something instinctley told me THAAAAT, she would NOT find this quite as humerous as me...sooooo being the incredibley MATURE person that I am I whispered to the girls, STOP! ADULTS ARE COMING!!!!! (Bahahahahhaha!!!! When I was tellin this story to Janelle shewas like ummmm...Mary aren't you older than Devi? I'm like NOPE! I'm a year and one month younger than her! Besides, DEV has pretty much ALWAYS been an adult in my life! LOL)
.
Daisy immediately curled up into her blanket and managed to look asleep, Alahondra on the other hand, judged that she wouldn't be able to jump into the top bunk in time so instead she jumped into MY BED with me and tried to appear SLEEPING....ahahahaha...and this is WHEN...
.
Very-pregos-about-to-pop DORM MOM opens the door and bursts through. ALLL IS DEAD SILENT as the guilty party PRETENDS TO SLEEP!!! She sees me sitting on the edge of my bed, with my camera STILL in my hand...LOL and she is like, is SOMEONE in this room knockin on the floor? I'm thinkin like OMW...what should I say, I don't wanna like buuuut...ummmmm...soooo I say, I'm NOT knockin on the floor.
.
Ooooo but very-pregos-about-to-pop dorm mom knows me TOO WEEEEELLL...she is like, NOT YOU, buuuuut is ANYONE???? I'm like AWWWWW MAN!!!! Sooooo i'm tryin to think of a good response that wouldn't be tellin on my roomates buuuut also wouldn't be lyin to my other friend...hahaha...soooooooo i'm about to say,
.
WEEEEEEELLLL it was the boys that STARTED IT, buuuuuuut before I could get that out, ALAHONDRA, decided to emphasize that she REALLLLY WAS ASLEEP, by letting out a quiet, gentle little SNORE!!! I'm like REALLLLY ALAHONDRA, YOU HAD TO SNORE???? AHAHAHAHAHA!!! Very-pregos-about-to-pop dorm mom's head whirls over to the "SLEEPIN" lump behind me. She narrows her eyes as she realizes WHO it is...
.
HONDRA! GET IN TO BED!!! She is like, Huh, what's going on? TRYIN to act INNOCENT, Oh Sis. Devi, you woke me up! HONDRA!!! AND yeah...weeeellll thats pretty much the END of the story and the MORAL IS....yes, there IS A MORAL...
.
THE MORAL OF THIS STORY IS, if your gonna do STUPID STUFF, be smart like DAISY and sleep on the BOTTOM BUNK where it is EASY to hide and look INNOCENT!!! Seriousley ALAHONDRA, with ALL THE STUPID stuff you do, YOU NEED TO BE... 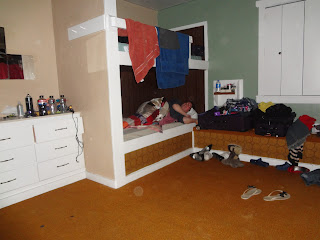