Annnnnnnnnnd this was our morning of the FINAL GOOD BYES!!!
FRIENDS FOREVERRR!!!
. 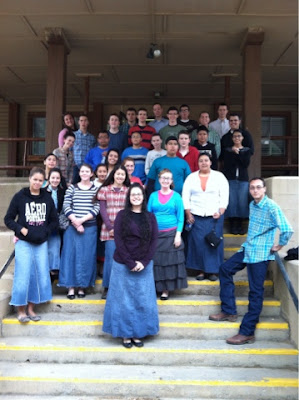 These were the SAME steps and porch that we had our WATER FIGHT on!!! Ooooo I sooooooooooo FORGOT to tell you all about that!!! Yes! There was a WATER FIGHT annnnnnnnnnd I want it to go on record that IT WAS STARTED BY DENAE ABBOTT AND DAWN WHATEVERRR HER LAST NAME IS!!! LOL
.
Buuuuuuuuuuut WHO GOT THE BLAME??? Yes, thats right ME!!! Miss Proverbs 31 herself!!! Bro. Andrew comes walking over with this HUGE grin and is like, OH this has Mary Ginty written all over it!!! I was like, WHATEVERRRR!!! I mean, yes, once it DID get started, I did HELP take it to the NEXT LEVEL, and YES I DID manage to get the WETTEST, OF COURSE....buuuuuuuut I did NOT START IT!!!
.
I was like, Bro. Andrew, WHAT do you think of us having like a big, huge, PLANNED water fight??? He was like, NOPE!!! The pastor's already talked about a PLANNED one and decided against it!!! I was like, Oooo okaaaaaaaay....soooooo as long its NOT PLANNED!?!?! He was like, WEEEEELLLL....annnnnnnd if the unplanned once get out of hand they will be ended as well!!! I was like, OH...Ummmmm...okaaaaaay sooooo anywayz we're NOT EVEN HAVIN THIS CONVO RIGHT NOW!!! Heh, heh, heh!!! ;) Buuuuuuuut we NEVERRRR did have another UNPLANNED water fight...NEXT YEAR PEOPLE!!! 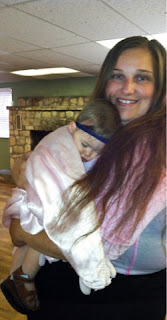 Here i am putting Hanna Foster to sleep...I hear...WHY IS MARY THE ONLY ONE NOT IN THE VAN??? Okaaaaaaaay REALLY people, I was Sooooo NOT EVEN SOCIALIZING...I really did have to find a place to lay her down...FOR REALZ!!! 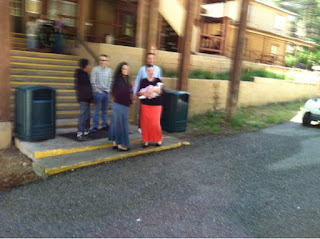 Here we all are inside the van...GOOD BYE EVERYONE!!! 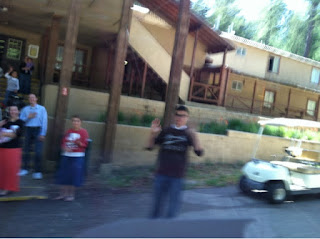 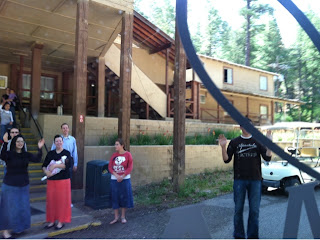 Or at Old Time the NEXT WEEK!!! LOL or at Youth Alive in September OR at West Coast Conference in Novemver OR at Conqueror's Conference after Christmas!!! LOL Which ever comes FIRST...cya THERE!!! :) 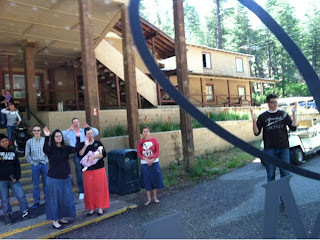 Really, I left this conference with such a FULL heart!!! As we began the 11 hour drive home and once the commotion and talkin had died down and everyone began to fall asleep, I pulled out my prayer journal and began to write to God my thankfulness for what he had done in my life at this camp and for the things he had spoken directly to me!!! I mean, its sooooo easy to forget even after JUST ONE week all that God spoke to me about, so it was nice having the journal to remind myself, LIKE,OH YEAH GOD, you DID tell me that...DUH!!! LOL.
.
Its interesting talking to the other young people, WHAT DID YOU GET??? Sometimes it wasn't even a WHOLE message, just ONE THING that was said during a message!!! Or something one of the preachers said just while greeting the congergation!!! I know Bro. Brown got up and he talked about how our outcome will depend on our MINDSET!!! HE talked about a college class that was given a preview paper summary of their college instructor for that semester and how half the papers at the end summary said that he was a hard and abrupt man and the other half of the class, their papers said at the end that he was a warm and friendly man! And the half that had the part that said he was warm and friendly did GOOD on the test on the other half all did BAD!!! Then they told the class what they had done, buuuuut even for the rest of the semester, the half that said he was warm and nice did GOOD and the other half that said he was hard and abrupt still did BAD the WHOLE semester!!! He said WHY??? Because it didn't matter what they were told, they already had a MADE UP MIND about their teacher and once you have a MADE UP MIND, NOTHING CAN CHANGE YOUR MIND!!! He told us that what we really needed was a MADE UP MIND about living for God!!!
.
Another one of the preachers, can't remember WHO, got up and talked about having leisure time...how we NEED leisure time, to study and know Biblical things and spend time with God, and that sort...just little things that they would say that you were just like, AHAHA...I soooo NEEEDED THAT!!!
.
Annnnnnnnnnd I can't remember the van ride home to much...I don't think anything all the memorable happened!!! Selina and Aurora laughed for like ten hours STRAIGHT...Travis and Zack were being brother's...pestering each other about the seating arrangments...LOL...Then Hanna Kifle called and in the middle of our convo she told me that I could get a ROCK to talk TO ME!!! So I had to pause our convo to tell everyone that and it made them all laugh!!! Cuz it was...that I would TALK TO A ROCK...buuuuuuuut that I could GET A ROCK TO TALK TO ME!!! Yes...this is TRUE...you all shoulda been there the first time I met JOE MOMMA..WOW...talk about RUUUUDE...LOL!!! 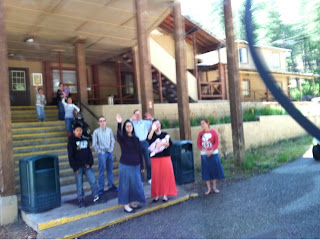 Then WHEN we got home we all had to testify...Ill do my testimony as a serperate blog post!!! Buuuuuuuuuuuuut it was soooooooo funny cuz my youth leader, Bro. Sam came up to me after service Sunday morning and all serious like said, "Mary, I am soooooo sorry to hear about your loss!" I was like, Loss??? HUH???!?!! WHAT LOSS???!?!?! He was like, Your SUNGLASSES!!! I was like, OH, AHAHAHAHA!!! Bro. Sam was like, were you thinking Oh no, who died??? I was like, WEEEEEEEEELLLL ACTUALLY i was thinking,
OH GREAT,
WHO'S ENGAGED NOW???
AHAHAHAHAHAHAHAHA!!!
YES, that IS the way my mind works!!! ;)
♥Mary Frances :)