Sooooooo on Sunday afternoons, in between services, I watch one of the girls in my church, Ashlee. So after I had taken home the Sunday School kids, we're gettin ready to head back to the church for the Filipino service and Ash like BEGS me to take her to go see her old school that she used to go to before they moved. Its like really close, so i'm like ok SURE!!!
.
So we drive up to the school and when we're driving up driving up there's a skater guy going by on his board, but I didn't think anything of it! I stop the car in the middle of the street, don't worry its like not on a busy intersection or something its a neighborhood. So Me and Ash are just sitting there and she is just lookin and waving at the school.
.
Weeeeeeelllll...I'm lookin out the window annnnnnd I see that this skater dude is walking over to the car. I'm thinkin, OH maybe he wants to ask me a question or is wondering WHY we're just sittin in the street lookin at the school. So he is getting closer to the car and is just walkin to the front passenger door of my car...I'm about to roll down my window to see what the dude wants buuuuuut before I can, he picks up his board, opens the passenger and makes a move to start to get in....buuuuut he can't because ALL my stuff is in the way...I can't deny that i did start to feel a little panicky, but he didn't look like he was older that 16 and it all happened so quickly...I was soooo confused... did he want me to give him a ride somewhere???
.
I watch as his eyes first go to the floor of my car, he takes in the Hello Kitty floor mat, a Hello Kitty window visor thingy,sparkly flip flops, a big, bright flowered bag...and confusion just fills his eyes... 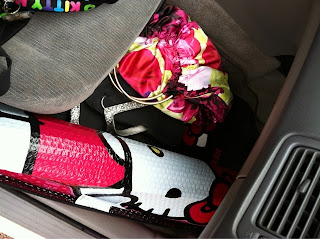 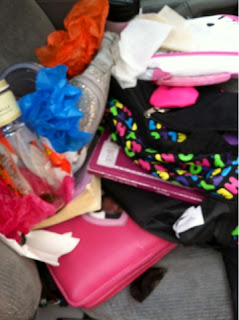 THEN EVEN MORE confusion as his eyes moved up the cherry air freshener hanging from my rearview mirror... 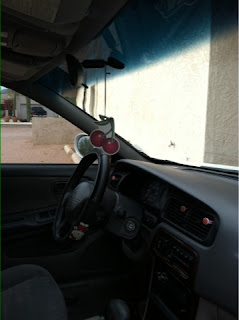 FINALLY his eyes laid on ME at the wheel, wide eyed, just STARING at him like WHAT IN THE WORLD are YOU DOING???


OH MY, you all should have seen the look of SHOCK on his face when he saw me staring at him!!! I wish I had snapped a picture for you all.. His mouth was just hanging open and his eyes got soooooo BIG... It was PRICELESS!!! He's like, I thought you were someone else!!! I am sooooooooooooo SORRY!!! Annnnnnnnd being the NORMAL girl that I am, I just BUSTED UP LAUGHING!!! Aparently, he didn't quite find the humor in it, cuz he shut the door as fast as he could, got on his board and hightailed it outta there...I of course couldn't drive away for another minute cuz I was still laughing sooo hard!!!
.
I was telling everyone at church about it! I'm like the WHOLE incident in general happening, was such a CLASSIC MARY MOMENT!!! Buuuuut I felt like I UNDERSTOOD the guy, getting into the completely wrong vehicle too...that is SOOOOO something that I would do!!!
.
It was soooo humorous to me!!! I have NO idea WHAT he was expecting to see at the wheel, buuuuuuuuuuut i guess it was...
NOT a One-God-Apostolic-Pentecostal woman in her... 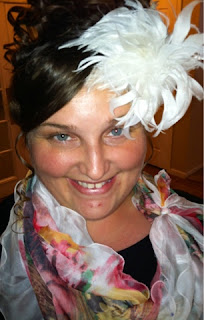