Are you throwing a tantrum???

I was driving in my car a few weeks ago, listening to Family Life Radio, and the woman that does it at night is a single young lady, Joy McBride, and she said something that I just HAD to share with you all, because it really helped me annnnnnd most likely if it helped me there is someone else reading this that needs to hear this too...
.
Joy said on the radio that she had been driving through a parking lot earlier that day when something happened that really shook her up. She as she was driving a lil girl with her mom just ran out into the street in front of her car. She said stopped the car in time and the mom reached out, grabbed the lil girl and started yelling at her. She said the lil girl starts crying and she was getting ready to start driving again when AGAIN the lil girl just starts to RUN in front of her car!!!
.
AGAIN the mom REACHED out and grabbed her in time and this time even more yelling at her to not just run into the street. She said to her complete and utter amazement, the lil girl NOW just threw herself onto the ground into a full blown TANTRUM!!! She said it was just like this lil girl has NO IDEA that the reason her mommy is stopping her from running was to keep her from DANGER!!! It was to STOP her from getting hurt!!! She said she was just sitting there in her car like, WOW!!! Probably thinking something a long the lines of WHAT A BRAT!!!
.
Buuuuut she said as she was thinking about it, God really began to speak to her and tell her that she does THE SAME THING in her own life. He stops her from something and she starts throwing a FIT because she is NOT having her way and she has NO IDEA that God is just looking out for her!!!
.
Annnnnnnnnnnnnnd at that very moment I was basically in my own lil tantrum myself so I was like WOW...OKAAAAAY GOD...I got it!!! You guys, we gotta STOP being SPIRITUAL BRATS!!! We've got to learn to except that when GOD STOPS us from something, he is just looking out for us!!! He is just PROTECTING US!!!!
That little girl couldn't understand, NORMALLY she could just go across the street, buuuuuuuuuut TODAY there was danger!!! Sometimes God holds us back because there is DANGER AHEAD!!! Sometimes its just not the right time because something needs to move out of the way and sometimes it is just altogether NOT his will because he has something else for us...WE don't know, because we can't see what he can see...we just have to TRUST HIM!
.
A well disciplined child knows, If Daddy says NO, the answer is NO!!! They may not like it, buuuuuuuuuuuuut they OBEY!!! We need to be well disciplined children of God. If God says NO, if God stops you, if God is holding you back, Don't have a tantrum...don't throw yourself on the floor in a fit... 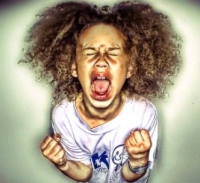 Don't be a BRAT!!!
"Trust in the Lord with all thine heart; and lean not unto thine own understanding. In all thy ways acknowledge him, and he shall direct thy paths." (Proverbs 3: 5-6)
♥Mary Frances :)
Posted by Mary Frances at 11:08:00 AM