The common denominator between Ethiopians and Italians!!!

WHAT DO ETHIOPIANS AND ITALIANS HAVE IN COMMON??? 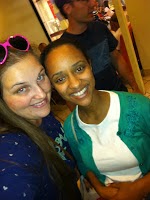