There's a little boy I watch that LOVES to play games AND he LOVES to make up new rules to add to the game, AS LONG AS these rules work FOR HIM, he's happy!!! Buuuuuut the moment one of these rules go against him and it means he loses a turn or he's out, weeeeeelllll let me tell you something everything goes DOWN and then he wants to change the rules yet AGAIN!!! He only likes rules as long as they are CONVENIENT for him.
.
Convenient means: fitting in well with a person's needs, activities, and plans. However, there is really no such thing as a convenient rule, a rule is SUPPOSED to be a rule, NO MATTER WHAT!!! However, our president seems to like, CONVENIENT rules!!! Therefore, gay marriage is now legal in every state... 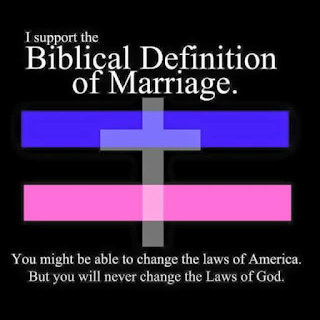 However, although people have pushed their agenda through, they can NEVER push they're agenda through to change God's laws! It doesn't matter if TWO people of the same gender THINK they are married, in God's eyes, they are STILL just two sad people living in sin!!!
.
And just because my country has passed another law that I do NOT agree with, this does NOT mean that I am no longer proud to be an American! I STILL love my country and I still believe this is THE BEST country there is to live in!!! Yes, Bishop Abbott, you have taught me well about this my whole life!!! :)))
.
If you think about it, this NOT the first thing our country has done that we don't agree with. Starting out with something early, early on was SLAVERY!!! Yes, owning another human being was once LEGAL in this country!!! And now more recently there are other things...Alcohol, pot, divorce...
.
In 1973, ten years before I was even born, it became legal in this country to KILL YOUR BABY!!! Yes, that IS what abortion is, its ending the life of your unborn baby...I can't imagine how saddening this must have been for so many people!!! How can you say its OK, to kill your baby...its A BABY!!!
.
However, just because American government is pushing thru convenient laws, this does NOT mean that the laws of God are changing!!! Sin is sin is sin is sin is SIN!!! If your wondering what sin is, sin is do anything that goes against the laws of God.
.
I've never been more disgusted than in my college "Marriage" class!!! They talked about EVERY kind of marriage and relationship possible other than just a man and woman vowing to love each other FOREVERRR!!! They talked about, open relationships, polygamy, second marriages, gay, transgender oh you name it and they talked about it!!!
.
One day we were divided into two sections to have a class debate on gay marriage... they were all like, well if two people love each other that's all that matters...well I decided to bring out a very valid point...what if someone decides they love their dog???? Everyones like, that's GROSS!!! I'm like, weeeeeeelllll buuuuuut if they love each other!!! They were like, yeah but that's not NORMAL!!! I'm like YEAH, and neither is GAY MARRIAGE!!! There is NOTHING normal about two men getting married!!! You can't just marry anything, what if someone wants to marry their stuffed animal or a sibling???  You can't just decide what marriage is, GOD DOES!!!
.
Mr. President, you may have decided to change the rules because they were no longer convenient for you, buuuuuuuuuuut in God's eyes they're STILL THE SAME!!! You might be powerful, buuuuuut your NOT more powerful than MY GOD!!! Yes, that's right, GOD, the one that this country was founded on!!! You'll NEVER change God's rules!!!
.
"Jesus Christ the same yesterday, and to day, and for ever." (Hebrews 13:8)
"The grass withereth, the flower fadeth: but the word of our God shall stand for ever." (Isaiah 40:8)
"Heaven and earth shall pass away, but my words shall not pass away." (Matthew 24:35)
"For ever, O LORD, thy word is settled in heaven." (Psalm 119:89)
♥Mary Frances :)
Posted by Mary Frances at 12:00:00 AM