Soooooooo in February, for Presidents day being a day off VACAY day, we decided to take a little trip up to Prescott AZ! The plan was to eat breakfast, HIKE and EAT lunch there, buuuuuuuuut it ended up snowing up there, which for us Phoenix Arizonans is just AMAAAAAAAAAZING!!! (Btw: I have a LOVE/HATE relationship with snow! I LOVE to go to the snow and spend a day in it! Sledding, tubing, snow angels, snowmen and a few snowball fights, buuuuuuuuut I would NOT want to LIVE IN IT!!! After a day, i'm ready to part wayz! Buuuuuut can't wait to spend that one day in it again NEXT YEAR! Kinda like some people...AHAHAHAHAHAAA!!!;)
.
So the day turned into a day of eating breakfast at Cuppers, playing in the snow, (No one wanted to hike the mountain with me in snow! Psssh!) SHOPPING, eating AND MORE playing in the snow!!! Well people just LOOOOOOOOOOOVED my outfit!!! I wore a blue hoodie, with my snowman cap...I was very warm and snuggly annnnnnd apparently ADORABLE...not to toot my own horn buuuuuuuuuuuuuuuut TOOT, TOOT!!! ;) Okaaaaaaaaaaay, no, this was ACTUALLY this was everyone else's words, I mean, I wasn't arguing with them on the matter,
.
BUUUUUT HEEEEEEEEYYY, if you look cute, YOU LOOK CUTE!!! And apparently, I had the adorable fluffy-snow-lady look going on and was embracing WHOLE-HEARTEDLY!!! 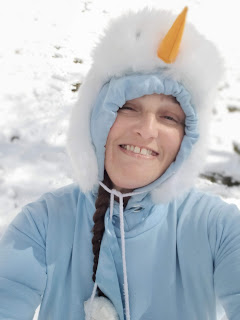 So people were just coming up to me all over saying they liked my hat, that I looked cute, they liked my outfit etc...This little old lady was following me at the mall, trailing me as I went into the bathroom, I hear this, excuse me, excuse me, so I turn and see this adorable lil old lady! (No disrespect in calling her a lil old lady, I plan on being an adorable, fluffy old lady some day!) So I turn to her and she's holding up her phone and was like, would you mind if I took your picture? Your outfit is just SOOOOOO CUTE! I really want a picture of it to show people! I was like, SURE, instantly ready to pose, OF COURSE!!! I mean people were just REALLY loving my snow-lady hat, a homeless man asked me for it, I just smiled, I mean IF he didn't have a hat, I woulda given it to him, buuuuuuuut he had a very nice, new and warm looking hat to keep him warm, if I gave him mine, then I wouldn't have one, ANNNNND I wasn't about to trade...Jus sayin! Sooooo I just smiled.
BUUUUUUUUUUUUUUUUUUUT
My favorite compliment went to the little old man that complimented me, I was walking by him an he says to me with this thick drawl, "I LIIIIIIIIKE YOUR HAT!" I was like, Oh, THANK YOU! He was like, "A UNICOOOOORN, I liiiiiiiiiiiike that!!!" I was like, Okaaaaaaaaaay that was OFFICIALLY my favorite compliment of the day!!! I mean, everyone was freaking out and complimenting me on my hat because it had snowed and my hat was a snow-man, and this brotha just completely missed the whole point!!! (Or exchanged the carrot nose point for a unicorn-horn's point!) Buuuuuuuuuuuuuut heeeeeeey, I DO LIKE UNICORNS!!! Ahahahahaaaaa!!!
♥Mary Frances :)
Posted by Mary Frances at 3:47:00 PM