Sooooooooo on Saturday, I went with my brother Abie and his family and my sister and the kids to the Mac and Cheese Festival here in AZ. (Which, by the way, was NOT nearly as cool as The Street Truck Festival last February OR The Italian Festival-Which goes without saying, I mean, after all, you can't beat an Italian festival..we're just like that ya know?!?! ;) Anywayz, I was surprised that there weren't even half as many mac vendors as there were street trucks and NO ONE and I do mean NO ONE'S mac and cheese was better than my brother's!!! (Even my sister said that, and she would NOT just say that, IF she thought someone's mac and cheese was better, she would just straight up tell him...that's the way she rolls!!! LOL)
♥
Anywayz, there was a super cool photo op with this big mac and cheese bowl, so after I took a pic of the kids together and then a pic of each family unit together, and then I was like, okaaaaaaaaay now it's my turn and I jumped over and did my pose with the bowl...
cuz you know,
standing there like everyone else
was just waaaaaaaay TOO NORMAL
I had to do... 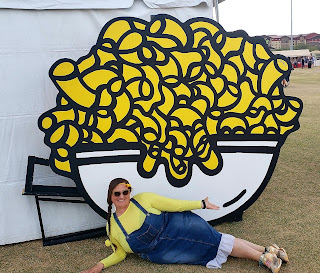 A MARY POSE!!!
Which turned out adorable, I must say!!! And yes, I planned my outfit hoping for a good mac and cheese photo op!!! (Dress for success, that's what I learned in Public Speaking...hee, hee!!!)
.
Soooooooooooo after I got up and we all started to walk away, we hear a little voice say,
hey guys, LOOK AT ME...
I'M AUNT MARY!!! 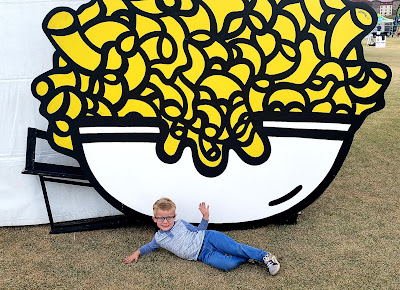 We turn around and there is my little nephew Kyle totally imitating me!!! It was soooooooooo HILARIOUS!!! We all just completely busted up laughing and so did everyone standing around!!! It was such an epic moment!!! Nothing like your 3-year-old nephew imitating your craziness!!! HAHA!!!
♥
♥Mary Frances :)
Posted by Mary Frances at 2:41:00 PM