Sooooooo it was literally THE CUTEST thing everrrr last year...I just gotta remember it all over again!!! We went to a little kids Christmas play and as we were walking in, there was a group of people there for another show and OF COURSE little O just has to talk to everyone on our way into the theatre! Hi! I'm Odin, what's your name?
.
So he sees this husky, older gentleman, wearing khacki slacks and a plaid shirt and who just happened to have a white beard and he greets him as usual, "Hi, I'm Odin!" and the man says back to him, I'm Santa Clause!
.
Odin just stops dead in his tracks, mouth agape, his WHOLE FACE JUST LIGHTS UP in sheer shock and joy! Then, without saying anything, he just walks over to the man and throws his arms around him in a HUGE ODIN HUG!!! 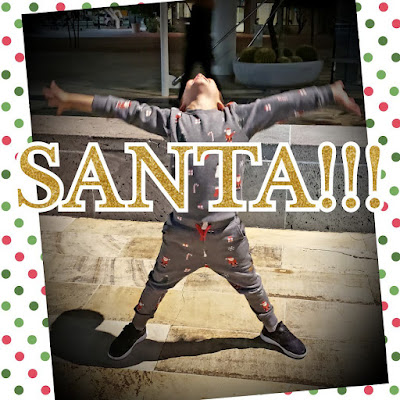 The look on his face was liiiiiiiike NO WAY, I'M ACTUALLY MEETING SANTA!!! Everyone was laughing soooooooo hard and it completely made the man's night!!! It was literally THE CUUUUUTEST, FUNNIEST THING EVERRRRRR!!! Gotta love this kid, there's just no one quite like him!!!
♥Mary Frances :)
Posted by Mary Frances at 12:43:00 PM