ODIN!!! What can i say besides I adore him??? He's an amazing mess that I ABSOLUTELY ADORE!!!
Buuuuuuuuuuut lately, he's just said some really, really, REALLY FUNNY STUFF that I have to share!!!
1. He has this thing that he just goes around singing, Aunt Mary has a boyfriend...which couldn't be further from the truth!!! And then he thinks he's going to get me all riled up by saying some crazy guy we know is my boyfriend! Well, I just turn it around on him and get him all riled up! I'm just liiiiike, yuuuup he's my boyfriend!!! He just kinda stares at me...I'm like, annnnnnd if he's my boyfriend, I think I'll just marry him!!! His eyes get a little wider...I'm like ANNNNND THEN HE'LL be YOUR UNCLE!!! Now his mouth his hanging open, I'm like YUP, YOUR UNCLE annnnnnd then you'll have to get him Christmas and birthday presents...he's like trying to think of something to say, I'm liiiiiiike AND YOU'LL HAVE TO GIVE HIM HUGS!!!!He just looks at me like I told him to pick up dog poop with this bare hands... He's liiiiiiike, I'M NOOOOOOT HUGGING HIM!!! I'm like weeeeeeeellll...I figured you must want him for an uncle if your saying he's my boyfriend!!! 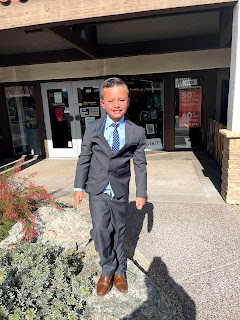 He's like, ok, ok, lets get someone else to be your boyfriend!!!
.
2.Him and Kyle have been in ULTRA spiritual mode since Kyle got the Holy Ghost!!! They were telling Chelsea on Sunday that it's just TOO BAD they're gonna hear the trumpet when it sounds buuuuuut NOT HER!!! They were actually bullying her so much they got in trouble!!! LOL
.
BUUUUUUT O's spirituality has superceded ALL...
3. Soooooooo during prayer at church this week, he like repeats everything he hears my pastor praying buuuuuut without people's names, buuuuuuuut he adds NAMES...the majority being MY NAME!!! Oh God, I thank you for my Aunt Mary! Just thank you for her!!! Please help her God! Help her to do the RIGHT THING! Help her to have A RIGHT SPIRIT!!! God help her spirit! Just help her God!!! I'm liiiiiiiike SERIOULSY??? I like lost it laughing!!! In case anyone is wondering...the only big decision or thing  I have going on in my life at the moment is working Uber Eats...Should I wake up at 4:30 or 5????
.
4.  Today I took the kids with me doing deliveries and I had picked up one order and was like, I wonder if the place I'm delivering it to is a house or an apartment? Without missing a beat, in this ultra-spiritual preacher voice, O says, God knows Aunt Mary! I just busted up laughing!!!! He's like, Auntie, HE DOES!!! He really does!!! I'm liiiiiiike YES O he does!!! I'm thinking in my head, it doesn't really matter...I just get sooooo annoyed delivering to apartments....buuuuut I don't want to tear down the kids faith!!!
.
5. He kinda believes in Santa...this is an argument between him an MJ at about 6am picking up delivery from iHop! She's like, there's NO SUCH THING Jesus gives us our gifts! He's like, I know but Santa is just a good man....He's nice!!! I'm liiiiiiike can someone tell SANTA TO BRING ME MORE COFFEE???? 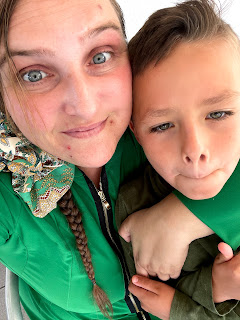