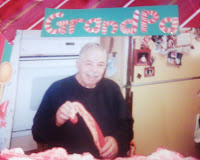 Red and white dough twisted together, infused with peppermint flavoring and little pieces of peppermint candies- Grandpa’s Candy Cane Cookies.
.
Shortbread dough dipped in milk then rolled in sesame seeds, cooked until golden brown. Best served while still warm with hot chocolate- that’s Grandpa’s Sesame Seed Cookies. As one takes a bite of this next cookie their mouth will be filled with a variety of delightful goodness. This cookie is crusty on the outside and chewy on the inside. It is filled with the sweetness of almond paste and yet salty from the taste of pine nuts- these are Grandpa’s Pinoli Cookies. The all around favorite cookie is a 3-layered, Neapolitan-Italian-flag cookie. In between each layer is a filling of fruit preserves and topped with a thin layer of melted chocolate. Once the chocolate is hardened they are cut into tiny, bite-size squares. We simply call these- Grandpa’s Three-Colored Cookies...
.
Every year, at the end of November, my Grandfather, Joseph Mangino, a retired New York City Policeman, would begin his holiday baking. Grandpa was a big man with broad shoulders, a loud booming voice, chubby cheeks a big smile and a twinkle in his eye. Everyone loved his baking and looked forward to it. Then one year everything began to change. .
“I don’t know Franny,” my grandpa says to his daughter who is my mom. “I don’t think I am going to be able to send cookies out to everyone this year.”
“Why not?” Asks my mom.
“I just don’t feel up to it,” he says with a sigh. “I don’t think I could get it all done.” I couldn’t imagine Christmas without Grandpa’s baking. It was a part of who he was and a part of what made Christmas.
“We’ll help you make them,” says my mom. “You can teach the girls. They need to learn anyways.”
.
So the baking lessons began…The thing about Grandpa’s baking lessons was that it didn’t matter if you already knew how to bake. When you were in HIS kitchen, you did things HIS way! I remember standing in the kitchen one day after putting all of the dry ingredients in a bowl; I got out the hand mixture to blend it real well. I plugged it into the wall then stuck it into the bowl, which was on the kitchen counter.
.
“Uh, uh,” said Grandpa. “Stick the bowl in the sink and then begin mixing it. This way if any of the flour comes out it will go in the sink.”
“Okay Grandpa,” I said. Next I got out the eggs and began cracking them into the bowl.
“Uh, uh,” said Grandpa. You gotta get a separate bowl and crack each egg individually to make sure the egg is good. Otherwise if one egg is bad it will ruin the whole batter.”
“Okay Grandpa,” I said. I began rolling the cookies out and putting the lumps on the cookie sheets.
“Uh, uh,” said Grandpa. “Those cookies are way to big. Make them smaller.”
“Okay Grandpa,” I said with a sigh. .
When I would get something right Grandpa would nod his head in approval.
“Atta girl Maria, atta girl.” Then when I would take the cookies out of the oven and they were just right Grandpa would smile. “Beautiful, beautiful,” he would say taking a bite.
So became our tradition, each year at Christmas time, my mom, my sister and I would take turns on different days baking cookies with Grandpa. .
“You gotta get this right Mary” Grandpa said to me one year as I baked. “I might not be here next year to show you how to do it.” I was startled to hear him say this.
“Don’t say that.” I said looking up from what I was doing. I couldn’t imagine him not being here.
“Well you never know,” said Grandpa. “Everyone dies some time.”
.
We all knew that Grandpa was getting weaker with each passing year. His body was deteriorating from Parkinson disease, but we didn’t want to think about it. .
Then one day it happened. Grandpa died. I remember sitting in his recliner in the living room watching as early in the morning two men from the mortuary came to take his body away. A soft blue blanket covered him as the men rolled his stretcher down the hallway, through his kitchen and out of his house. It took a while for the reality of the situation to really sink in. Grandpa was gone.
.
However the things that he taught us still live on...
As Christmas time comes around my family and I begin our baking. It’s a family thing and my brother John has picked up the role of BOSSING everyone around now. Through the laughter and teasing of who broke the cookies and who cooked them too long, I remember Grandpa’s words to me;“You gotta get this right Mary, I might not be here next year.”
“ Don’t worry Grandpa. I promise, I am going to get it right!” I start mixing the ingredients in a bowl on the counter. Then I remember and put the bowl in the sink. I pull out a separate bowl for the eggs and hope the cookies aren’t too big. As I take the cookies from the oven, I know Grandpa would be smiling, nodding his head in approval, satisfied in knowing that his cookies are still being baked. If I listen closely as I take a bite of a cookie I think I hear Grandpa. “Atta girl Maria, atta girl.” I take another bite and savor the taste. “Beautiful, beautiful!”
♥Mary Frances :)
Posted by Mary Frances at 12:00:00 AM