Weeeeeeeeeeelllll this past week we have been having an AWESOME, AMAZING REVIVAL!!! Annnnnnnnnnnnnnnd Pastor Abbott brought in the ONE AND ONLY
BISHOP ABBOTT!!! 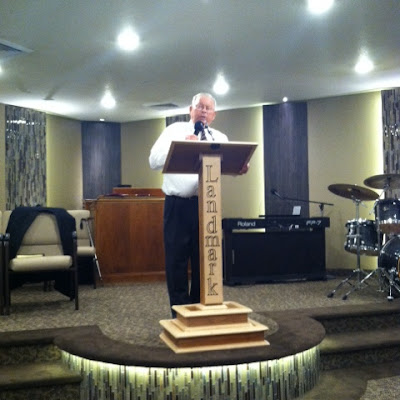 His father and the founder of our church!!! Annnnnnnd you guys wanna know something, I think EVERY MESSAGE that Bishop preached were OLD MESSAGES!!!! I mean starting from Wednesday night, he was preaching about LOVING THE WORD OF GOD!!! He was telling stuff and quotes that I LITERALLY have written in my Bible, simply because he's been preaching this same stuff since I was a kid!!! Every sermon he preached I knew ALL the stories he was gonna tell and could of told them with him as he was telling them...It's old stuff buuuuuut its still THE GOOD STUFF!!! Just because I've heard it before doesn't mean its leftovers... Its still FRESH!!!! 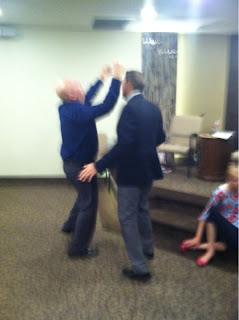 Then Kensie Karlson was praying for the Holy Ghost at the alter... 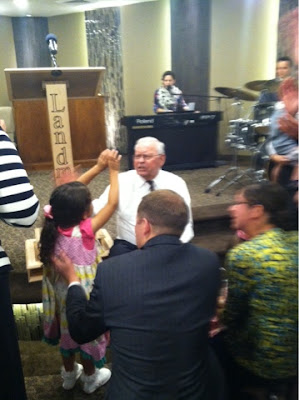 The Abbott's niece Arianna was praying for the Holy Ghost... 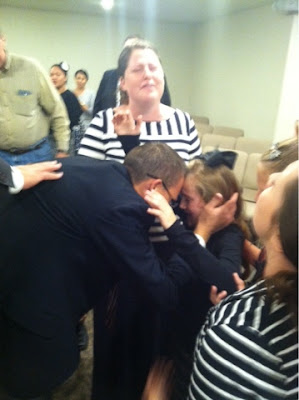 Weeeeeeeeeeelllllll THEN this morning ANOTHER backslider prayed back through to the Holy Ghost!!! He also brought his wife and kids with him and his wife was praying and his daughter...its His dad is Pentecostal preacher and you could tell he's a preacher's kid cuz TONIGHT he was ALREADY up front PRAYING WITH PEOPLE!!! Its sooooooooooo AWESOME!!! 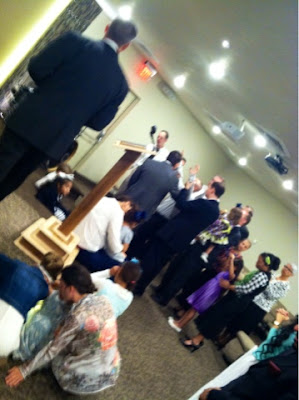 THEN tonight, before church even started, during pre-service prayer, Arianna decided she wanted to get the Holy Ghost annnnnnd she wanted it BEFORE CHURCH!!! 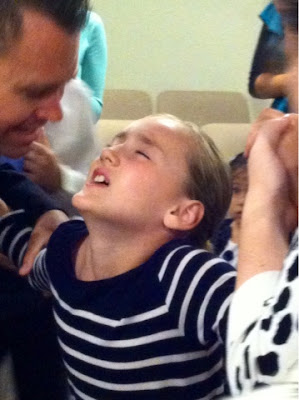 SPEAKING IN OTHER TONGUES!!! 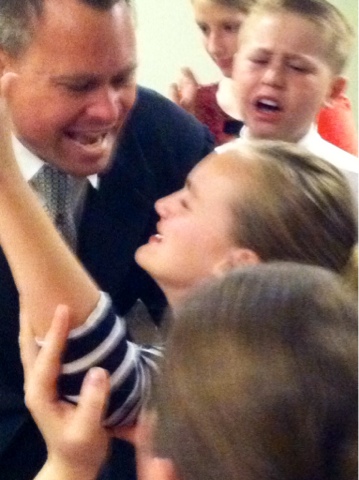 Annnnnnnnnd she got it JUST IN TIME to be able to PRAISE SING during the worship service!!! 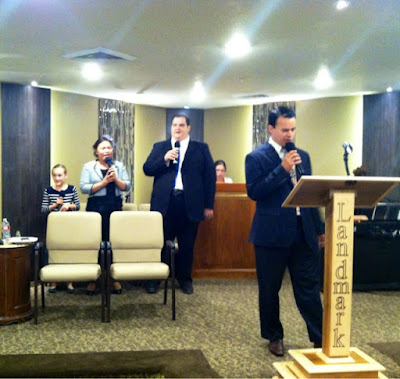 Then during the song service this man, ANOTHER BACKSLIDER came up and he prayed back through to the Holy Ghost!!! 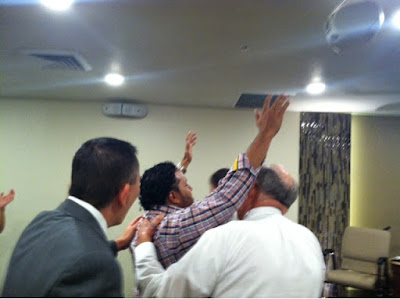 God is calling his lost sheep BACK HOME!!! We have three backslidden men, that aren't even from our church originally, they're from different states, one is even from Peurto Rico BUUUUUUT God is bringing them to our church and calling them home!!! Let this be a testimony to any of you out there that have backslidden loved ones...IT DOESN'T MATTER WHERE THEY GO...God is STILL THERE!!! 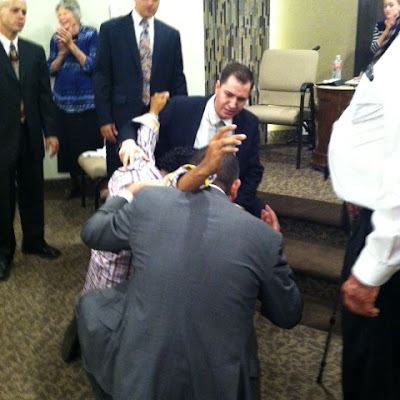 Annnnnnnnnnnnnnnnnnnnnnd NOW I saved my favorite story for last, this man, TONY GOT THE HOLY GHOST!!! You all I have to tell you, this man is the fiancé of one of the ladies I've been bringing to church annnnnnd he just recently started coming annnnnnd the first time we met we DID NOT have a friendly meeting!!! AHAHAHAHAHA!!! 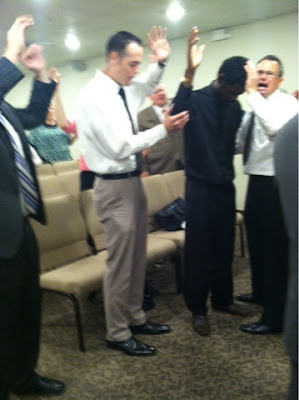 Lets just say that I was SOOOOO MAD!!! I could NOT believe that I was being that disrespected BY AN ADULT, while bringing them to church! Weeeeeeeelllll to make the long story short cuz we were laughing and talking about it tonight...HE THOUGHT I WAS ONE OF THE KIDS ON THE BUS!!! Cuz I was sitting in the back and not up front with Tommy...I do that when we have a full van cuz you know, these kids are cray-cray WILD...anyway, Yeah, he just assumed that I was one of the kids...AAHAHAHAHAHA!!! That's sooooo AWESOMELY HILARIOUS!!!
.
Anywayz, I've been noticing a difference in him and have really felt a burden for him...I was soooooooo HOPING that he would get the Holy Ghost on Wednesday but he didn't!!! Buuuuuuuuut you know when you like just like HOPE to see someone get the Holy Ghost and you imagine it in your mind and wait and pray...
.
Weeeeeeeelllll tonight, during the song service STILL, while the other man was praying Pastor motioned for Tony to come up and he came right up to the alter and pastor started praying with him and BOOM, you all shoulda seen him when the Holy Ghost hit him, it was like AWESOME!!! He was praying sooooo loud, the church went WILD!!! 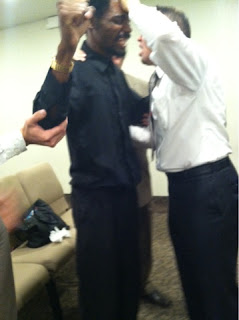 Annnnnnnnnnnd afterwards you could just see the joy all over him! His eyes just lit  up and he was smiling and laughing!!!! 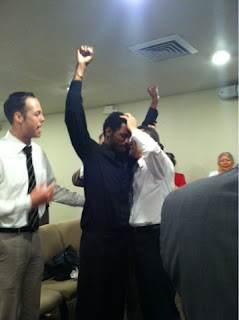 He said he just felt like he could walk straighter annnnnd he's soooo happy he even has a smile on his face while he's getting it!!!  Its real! Its REAL!!! I KNOW ITS REAL!!! 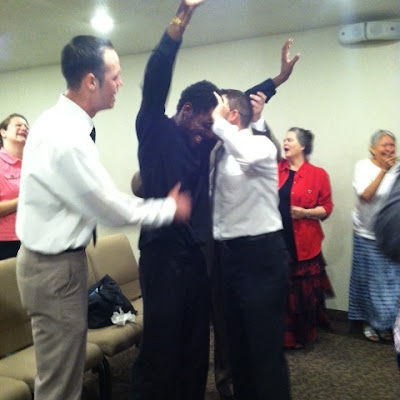 I was showing him the pictures after church and he was like, send those to Marshea! I'm like, MAN she's going to wish she had seen you tonight!!! He's like, THATS WHAT SHE GETS FOR NOT COMING!!! THATS WHAT SHE GETS!!! AHAHAHAHA!!! Just wait till you guys get to know him better, This dude is HILARIOUS!!!

Buuuuuuuuuuuut she was sooooooooo happy when we got there!!! She was saying that she wants to be baptized again!!! Actually, Marshea also has a Pentecostal background, so she was baptized as a child and I asked her if it was in father, son, holy ghost or in Jesus name? ANd she said, no It was in Jesus name but I didn't have an understanding of what it meant so it didn't really mean anything to me....so she said she wants to talk to Pastor and see if they can get a Bible study on Jesus name baptism annnnnnd get baptized ASAP!!! I was like, OKAAAAAAAAAAAy buuuuuut if its at all possible, TRY TO WAIT TIL I"M BACK IN TOWN...buuuuuut...I mean...If God tells you to get baptized sooner...DON'T WAIT!!! 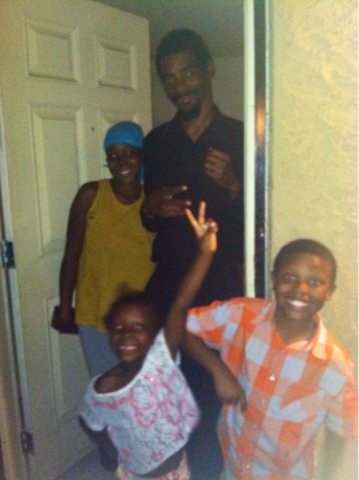 Anywayz, I'm juuuuuuuust soooooo EXCITED about what God is doing at our church!!! This is just THE BEGINNING!!! REVIAL IS AT LANDMARK!!!! Annnnnnnnnnnnd I'm telling you all, there is NO BETTER LIFE THAN LIVING FOR GOD AND WORKING FOR HIM!!! Annnnnnnnnnnnd if your reading this and wondering what all this talk of the Holy Ghost is, its IN THE BIBLE...ACTS CHAPTER 2...READ IT FOR YOURSELF!!!