Recently I found something that I absolutely adore in my mom's room...
HER TREASURE BOX!!! 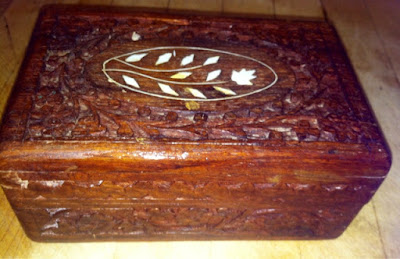 I remember when I was a little girl, any chance I had to look in her treasure box, I would. Sometimes I would offer to dust her room, and take extra time on her dresser, just for a peep in the treasure box. Other times I would just sneak in her room when I knew she was to busy to find me. Her treasure box was filled with all sorts of little trinkets, it was just so interesting to me, and I would think, when I grow up, I'm going to have a treasure box, JUST LIKE MY MOM'S!!!
.
As I was going through her treasure box now as an adult, I realized that most of her treasures would have no value to anyone else... 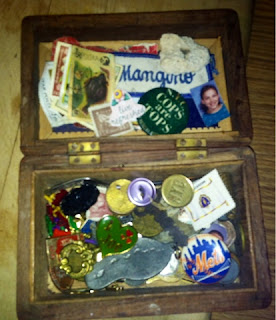 Memoirs from her childhood family, travel trinkets, little things to remind her family and things she accomplished... 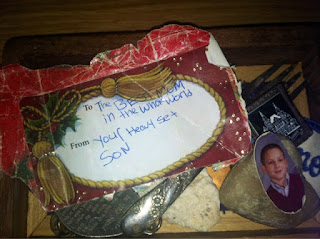 Buuuuuuuut almost EVERYTHING I found in that little treasure box had to do with family, her children. I remember when God gave my mom the vision of heaven, she was in such absolute awe of what she saw, there was such a longing n her heart to leave this world behind her and go to what she had seen, and YET, I remember her also breaking down and crying. When I asked her what was wrong, she said she wanted to so badly to go to heaven, but she didn't want to leave us...We were THE ONLY THING that she longed to hold on to, the only thing that caused her to hesitate...
♥
WE WERE HER TREASURE!!! 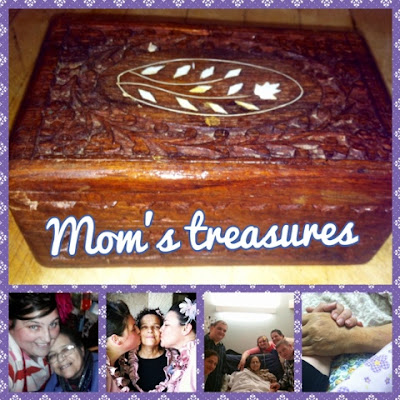 Recently, out of curiosity I was researching about a certain religion that highly values motherhood. Upon my research, I came across the writings of a disgruntled ex-member of this religion. Now, I don't personally agree with a lot of the teachings, because they do no follow what the Bible says, I DO AGREE on their take on motherhood, however, this previous member did NOT!!! He said, my sister is SO SMART, she COULD HAVE been ANYTHING, but instead of pursuing a career, SHE IS JUST A MOM!!! When I read that, I just thought, WOW!!! It blows my mind that anyone could say something like that!
♥
I am SO GREATFUL for a mom that put MOTHERHOOD over her CAREER, we weren't just a check on her bucket list, she TREASURED US!!! My mom knew the secret of THE ONLY things you can take with you to heaven, SOULS!!! Truly we were THE ONLY treasures she wanted to take with her!!!

"Lay not up for yourselves treasures upon earth, where moth and rust doth corrupt, and where thieves break through and steal: But lay up for yourselves treasures in heaven, where neither moth nor rust doth corrupt, and where thieves do not break through nor steal: For where your treasure is, there will your heart be also." (Matthew 6:19-21)