That Awkward moment when...

Soooooo as I stated in an earlier post, in the beginning of this month, Joe and Anali Velez came in from Roswell NM to surprise Stultz for his college graduation!!!
.
Sooooooo I've been pumping everyone up, like YOU GUYS, when they say his name, we have got to scream SOOOOOOOOOOO LOUD!!! I told him, like, IF you don't hear me when they yell your name then, THE WHOLE night is just a FAIL for me!!! (Obviously NOT for him since he's getting that degree) So when they yelled his name I'm telling you guys I SCREAMED SOOOO loud I thought the whole world could probably hear me!!!
.
Afterwards, I was like, so Jonathon, DID YOU HEAR ME??? He was like, just barely!! I was like, WHAAAAAAAAAAAAAAAT??? Like, OMW Jonathon, I was sooooooooooo loud, I can't believe you hardly even heard me!!!
.
So I turned to Joe and Anali and I'm like, YOU GUYS, wasn't I like soooooooooooo LOUD!!! So they were like, Yeah...then Joe just busts up laughing and was like, BUUUUUUUUUUUUUUUUUUUUUT, you were like, 10 TIMES LOUDER when the school released the balloons and streamers from the ceiling!!! I'm like, I WAS???? They're like,
YEEEESSS!!! 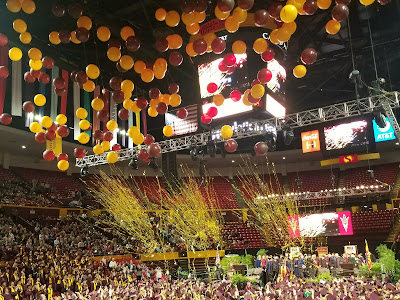 Soooooooooooo there you have it my friends,
THAT AWKWARD MOMENT WHEN...
.
You find out you, screamed LOUDER for balloons and streamers coming out of the ceiling, than you did for YOUR FRIEND that spent YEARS of their life, giving up fun and fellowship for studying and doing homework, class projects etc...to get their college degree in accounting...YEAH... AWWWWWKWARD!!! BAHAHAHAHAHA!!!
#SORRYSTULTZ 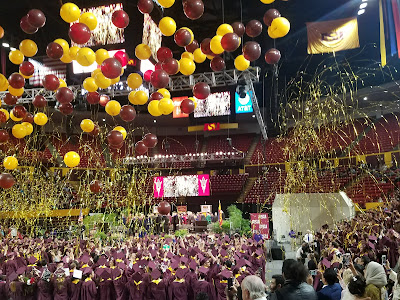 The funniest part about the whole thing is that I LITERALLY have NO RECOLLECTION of my screaming when the balloons and streamers came out, it LITERALLY JUST HAPPENED!!! See I had planned my scream for Stultz, buuuuut the balloons and streamers was completely Unplanned!!! It was just a completely natural reaction  of PURE exhilleration I had to seeing the balloons and streamers come pouring out!!! EEEEEEEEEH...I sooooo loved it!!!!
.
Plus now I have some new ideas for WHEN I GET MARRIED!!! People are like, you know, if we do wait til we get married to kiss, I don't want to make a big deal about it you know, its NOT a show of how pure we are etc...annnnnnnnd I'm like, I TOTALLY agree with that!!! I don't want to make a big deal of it either...I was just thinking maybe...SOME BALLOONS AND STREAMERS FALLING OUT OF THE CEILING FOR OUR FIRST KISS!!! That's all!!! ;)
.
I mean, IF I HAD KNOWN that college graduations do that, I MAY HAVE ACTUALLY GRADUATED FROM COLLEGE...just for THAT MOMENT!!! AHAHAHAHAHAAAAAAAAAAA!!!!
.
Seriously, his mom recorded it happening, so I'm like, Okaaaaaaaaay whenever i'm having a bad day I'm going to just hit that and I can just be like, EEEEEEEEH again...maybe I can even get a Bible scripture to scroll across, like Jeremiah 29:11...BAHAHAHAHAAA!!!
.
The other day I was talking to one of my friends and she was like, You know Mary, God's plans for us are so much better than we could ever even fathom or imagine in our minds!!! I was like, I know, LIKE THE BALLOONS AND STREAMERS!!! She was like, WOW MARY, REALLY???? I was like, YEEEEEEEES, REALLY!!!