Sooooooooo we're like into the second day of WCC and someone asked me...SOOOOO MARY, have you had any Classic Mary Moments yet??? I was like ummmm.... ACTUALLY NO!!! I mean, I've had like a TON of fun...and there has been some FUNNY stuff going on buuuuuut...I don't know about ANYTHING that would actually qualify as a Classic Mary Moment!!! Which was kinda ya know...disapointing...HAHA!!!
.
THEN BAM...Thursday night comes!!! Bro. Ham preached and absolutely AMAZING message about the Spirit of Holiness and I mean really, in all seriousness and honesty, the message really stirred me and brought conviction to me!!! I was just at the alter crying and praying and well ya know...
.
So that night I saw Mallory Ham in the lobby of the Radisson and I didn't really know her that well, I had just met her last year at the lock in and we've kind of kept in touch a lil since then buuuut we were planning to hang out this year! Soooooooo I see Mallory and we hug and stuff... 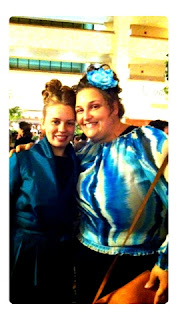 and I'm like OH was that your dad the preached tonight? And she was like, Oh yeah it was...And I was like oh yeah I figured your last name is Ham and Bro. Ham...ya know its not all that common of a name!!!
.
So i was like telling her OH MAN!!! That was some GOOOOOOD preaching your dad did tonight and she is just like oh yeah...and I'm like I mean SERIOUSLEY talk about CONVICTION!!! THen I went from being serious to weeeeellllll...my cRaZy, dramatic self...I just wanted to emphasize my point...soooooo i'm like...
.
I mean a really CONVICTIN message...Annnnd I like dramatically throw my head back, fling my arms out in the air and say, I mean, just lay me on the alter and SLAUGHTER ME!!! Sooooo Mallory is like totally just laughing at my dramatics and all of the sudden I notice this lady that has been standing with Mallory the WHOLE time i've been talking to her...
,
The lady sticks out her and and says, AND I'm SIS. HAM!!! I like OMW!!! AHAHAHA!!! Like ummmm...AKWARD right??? Sooooo i'm like laughing and like OH....ummmm HI!!! I!!! And I give her a hug...cuz ya know...i'm HUGGER!!! Sooooo as I release her from the hug she is like OH SISTER...
.
I think I feel a spirit of social networking on you!!! (That was a HUGE part of Bro. Ham's preaching) I was like OMW!!! I was laughing sooooo hard!!! Then she is like, My husband is here TOO if you would like to meet him!!! I was like ummmmm....THATS OK!!! LOLOLOL Then Mallory is like, Oh yeah, I see him over there talking to Elder Garrett...maybe they can both fit in a slot for you right now to coucil about these CONVICTIONS!!! HAHAHAHAHA!!! I was like yeah...i'm GOOD!!!
.
LOLOLOL!!! Spirit of SOCIAL NETWORKING!!! HA!!! Maybe that wasn't the conviction part for me...MAYBE it was the part about GOSSIPING!!!! LOLOLOL!!! J.k!!! JUST KIDDING PEOPLE!!! Maybe it was just cuz I think me and my iPhone are a little TOO CLOSE to each other!!! Or MAYBE I don't need to explain to everyone...WHY...Anywayz, Mallory and I laughed about that EVERY time we saw each other the rest of the conference...that and the STEP-SISTER church...that was a joke between us from WCC 2011!!!
.
Buuuuuuuuut yeah...when your acting silly and cRaZy, LOOK at the person standing NEXT to the person you are talking too!!! You NEVER know...WHO it might be...like the MOM of the person or the WIFE of the minister...AHAHAHA!!!
♥Mary Frances :)
Posted by Mary Frances at 12:41:00 AM