Soooooooo IF  you've been reading my blog for a while, you know that CLASSIC MARY MOMENTS just happen...they just DO!!! You can't plan for them, you can't ask me to have one, they just happen, unexpected and surprisingly...just expect the Unexpected when you are with me!!! Sooo of course one happened on the trip to Hanna's wedding!!! As you know tho, weddings are NOT the place you want a CMM to take place...remember this one HERE...AHAHAHAAAAA!!!
.
So Brandon, Hanna's fiancé, NOW HUSBAND, had made it very clear that he did NOT want to see her wedding dress at anytime BEFORE the wedding...he was very adamant that he did not want to see her or her dress on the wedding day until she was walking down the aisle...he just wanted that special moment of seeing her that first moment in her dress as she walked down the aisle!!! Of course us girls were like, AWWWWWWWWW that's SOOOOO SWEEEEEEET!!! SOOOOOOO ROMANTIC!!!
.
Well, I went with Hanna for her last wedding dress fitting on the 17th, she was having me take some pics on her iPhone, (Blocked it out, you all don't get to see her dress till the day of the wedding POST....ahahaha...they're already married now...anyway) I was taking pics on her iPhone, buuuuuut lets be real, my Samsung has a WAAAAAAAAAAY better camera, sooooo I took some on mine too. I smirked to myself because, AS USUAL, the Samsung had outdone the iPhone pics.
.
I was thinking, Oh I'm gonna send pics from both camera to Stultz and ask him which one is better, THEN I can prove to Hanna that the Samsung phone is truly better than the iPhone...better yet, I'll send it to several people, including Brandon...I would make sure I did NOT say they were from two different kinds of phones....I would just randomly ask, which pic between these two pics do you guys think is better???
.
HA! Wouldn't that be HILARIOUS when I could boast to Hanna that EVEN BRANDON had said the Samsung phone pic was BETTER!!! I was getting ready to write out the text with the two pics, buuuuuuuuuuuuut then I got distracted and started doing something else...Noooo clue what...buuuuuuut you know me...my thoughts rapidly change!!! Annnnnd just like that, I was thinking about something else... 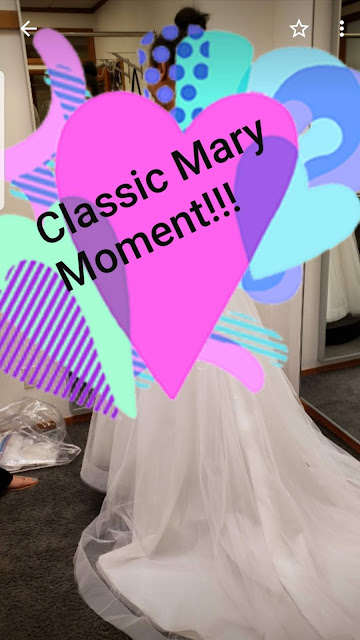 Later on in the week, yes, literally two days later, after my birthday, after the rehearsal and  LATE THE NIGHT BEFORE THE WEDDING, Brandon had said goodnight to Hanna and no communication between them he said after mid-night and IF they really needed some important message I was going to be the go between...which I';m thinking is a bad choice since I either respond to messages in two seconds or 2 days...buuuuut whatever, I'm like awwww he's sooooo cuuuuute about this whole not seeing the dresss or her until the wedding thing...THEN it hits me...
.
i'm laying there and gasped, OMW...I ALMOST RUINED THE WHOLE THING!!!! I WOULD HAVE RUINED THE SURPRISE IF I HAD ASKED HIS OPPINION!!! Annnnnnnnnnnd I never even realized it!!! Literally, the only thing that stopped me from DOING THAT WAS THE FACT I GOT DISTRACED!!!
.
The only thing that stopped me from having a CLASSIC MARY MOMENT...
.
was literally, MY MARYNESS!!! AHAHAHAHAHAHAHAAA!!!
.
Buuuuuuuuuuuuuut Phew! Gotta thank God for that ADHD!!!

♥Mary Frances :)
I don't really have ADHD, buuuuuut my big sis is convinced that I do!!! There's two kinds and one is where you can't stay focused on one thing for very long!!! IDK though...there are some guys from back in the day that MAY argue with that, buuuuut then there's others guys that would say its TRUE!!! It's either one or the other with me and really NO in betweens!! LOL
Posted by Mary Frances at 11:55:00 AM