Soooooooooo for the last month and a half or so, T's car has been shaking really badly, it was getting worse and worse, so she decided to take it in to the mechanic on Monday. Dreading what was wrong and the price it was going to cost, WHAAAAT a relief it was to her that it was ONLY one of tires! He said to get it changed ASAP!!! Weeeeeeellll, being the AMAAAAZING lil sis that I am, I offered to take it in for her while she was at work! ;)
.
So yesterday we switched vehicles in the morning. I brought T's car to discount tire for her and when they were done I went out and saw that they had pulled the van up, with the door open and waiting, I got in and was about to pull away when this lil Asian man came running out, mouth hanging open and a panicked look on his face...
Apparently,
I was in the WRONG VAN!!! 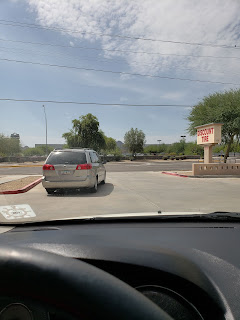 🤣😂🤣
I was like, Ooooooooh, I was wondering what the tools and pile of men's clothing on the passenger's seat was. I thought maybe the Discount Tire Men had gotten hot and discarded their shirts, I mean, this is AZ  SUMMER we're talking about, and LEFT their shirts and tools on the seat of the van! I figured my sister could just deal with it, after all, I have a BOOK to write and don't have time to deal with sweaty men's clothing!!! BAHAHAHAHAAAA!!!
.
Annnnnnd really, it may seem airheaded of me to almost drive off in the wrong vehicle, buuuuuut REALLY, who just pulls their vehicle up to the entrance of a building, leaves the keys in, door open??? It's NOT like we're living in Mitford, this is PHOENIX we're talking about!!! Bet he'll neverrrr do that again!!! I like to think I just kept him a little SAFER for the future...maybe even helped prevent him from REALLY getting his car stolen!!! BAHAHAHAAAA!!!
.
Anywayz, my sis was like, so on your way home, did you notice if the van had stopped shaking?! I was like, Ummmmm...I don't know, buuuuuuuuut considering that I almost drove away in the WRONG VAN, I'm probably THE WRONG PERSON to be asking!!! AHAHAHAHAHAAAA!!!
.
Sooooooooooo there you guys have it,
THE CLASSIC MARY GRAND 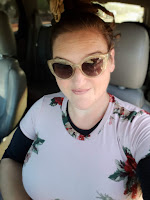